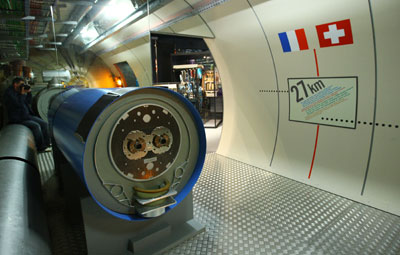 A model of the Large Hadron Collider in the CERN visitor's center in Geneva.
Johannes Simon/Getty Images

The principle behind the LHC is pretty simple. First, you fire two beams of particles along two pathways, one going clockwise and the other going counterclockwise. You accelerate both beams to near the speed of light. Then, you direct both beams toward each other and watch what happens.

The equipment necessary to achieve that goal is far more complex. The LHC is just one part of the overall CERN particle accelerator facility. Before any protons or ions enter the LHC, they've already gone through a series of steps.

­Let's take a look at the life of a proton as it goes through the LHC process. First, scientists must strip electrons from hydrogen atoms to produce protons. Then, the protons enter the LINAC2, a machine that fires beams of protons into an accelerator called the PS Booster. These machines use devices called radio frequency cavities to accelerate the protons. The cavities contain a radio-frequency electric field that pushes the proton beams to higher speeds. Giant magnets produce the magnetic fields necessary to keep the proton beams on track. In car terms, think of the radio frequency cavities as an accelerator and the magnets as a steering wheel

­Once a beam of protons reaches the right energy level, the PS Booster injects it into another accelerator called the Super Proton Synchotron (SPS). The beams continue to pick up speed. By now, beams have divided into bunches. Each bunch contains 1.1 x 1011 protons, and there are 2,808 bunches per beam [source: CERN]. The SPS injects beams into the LHC, with one beam traveling clockwise and the other going counterclockwise.

Inside the LHC, the beams continue to accelerate. This takes about 20 minutes. At top speed, the beams make 11,245 trips around the LHC every second. The two beams converge at one of the six detector sites positioned along the LHC. At that position, there will be 600 million collisions per second [source: CERN].

Not every proton will collide with another proton. Even with a machine as advanced as the LHC, it's impossible to direct beams of particles as small as protons so that every particle will collide with another one. Protons that fail to collide will continue in the beam to a beam dumping section. There, a section made of graphite will absorb the beam. The beam dumping sections are able to absorb beams if something goes wrong inside the LHC. To learn more about the mechanics behind particle accelerators, take a look at How Atom Smashers Work.

­The LHC has six detectors positioned along its circumference. What do these detectors do and how do they work? Find out in the next section.

The events inside the LHC will also produce photons (the particles of light), positrons (anti-particles to electrons) and muons (negatively charged particles that are heavier than electrons).