Will the LHC Destroy the World? 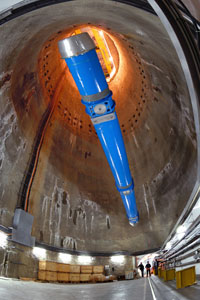 The LHC will allow scientists to observe particle collisions at an energy level far higher than any previous experiment. Some people worry that such powerful reactions could cause serious trouble for the Earth. In fact, a few people are so concerned that they filed a lawsuit against CERN in an attempt to delay the LHC's activation. In March 2008, former nuclear safety officer Walter Wagner and Luis Sancho spearheaded a lawsuit filed in Hawaii's U.S. District Court. They claim the LHC could potentially destroy the world [source: MSNBC].

What is the basis for their concerns? Could the LHC create something that could end all life as we know it? What exactly might happen?

Another concern is that the LHC will produce an exotic (and so far hypothetical) material called strangelets. One possible trait of strangelets is particularly worrisome. Cosmologists theorize that strangelets could possess a powerful gravitational field that might allow them to convert the entire planet into a lifeless hulk.

Scientists at LHC dismiss this concern using multiple counterpoints. First, they point out that strangelets are hypothetical. No one has observed such material in the universe. Second, they say that the electromagnetic field around such material would repel normal matter rather than change it into something else. Third, they say that even if such matter exists, it would be highly unstable and would decay almost instantaneously. Fourth, the scientists say that high-energy cosmic rays should produce such material naturally. Since the Earth is still around, they theorize that strangelets are a non-issue.

Another theoretical particle the LHC might generate is a magnetic monopole. Theorized by P.A.M. Dirac, a monopole is a particle that holds a single magnetic charge (north or south) instead of two. The concern Wagner and Sancho cited is that such particles could pull matter apart with their lopsided magnetic charges. CERN scientists disagree, saying that if monopoles exist, there's no reason to fear that such particles would cause such destruction. In fact, at least one team of researchers is actively looking for evidence of monopoles with the hopes that the LHC will produce some.

Other concerns about the LHC include fears of radiation and the fact that it will produce the highest energy collisions of particles on Earth. CERN states that the LHC is extremely safe, with thick shielding that includes 100 meters (328 feet) of earth on top of it. In addition, personnel are not allowed underground during experiments. As for the concern about collisions, scientists point out that high-energy cosmic ray collisions happen all the time in nature. Rays collide with the sun, moon and other planets, all of which are still around with no sign of harm. With the LHC, those collisions will happen within a controlled environment. Otherwise, there's really no difference.

Will the LHC succeed in furthering our knowledge about the universe? Will the data collected raise more questions than it answers? If past experiments are any indication, it's probably a safe bet to assume the answer to both of these questions is yes.

To learn more about the Large Hadron Collider, particle accelerators and related topics, accelerate over to the links below.