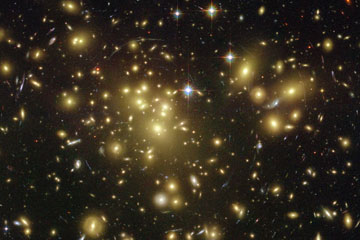 Let's heap a second scoop onto the relativity cone -- a lovely taste of Black Forest courtesy of German-born physicist Albert Einstein. As we just mentioned, Galilean relativity, even after it got a few tweaks from Newtonian physics, was broken. Scientists learned that light travels at a constant speed, even on a speeding train.

Therefore, Einstein proposed the theory of special relativity, which boils down to this: The laws of physics are the same in all inertial frames, and the speed of light is the same for all observers. Whether you're in a broken-down school bus, a speeding train or some manner of futuristic rocket ship, light moves at the same speed, and the laws of physics remain constant. Assuming speed and direction are constant and there wasn't a window to peer through, you wouldn't be able to tell which of these three vessels you were traveling in.

But the ramifications of special relativity affect everything. Essentially, the theory proposed that distance and time aren't absolute.

Now it's time for the third ice cream scoop, and it's another hefty helping from Einstein. Let's call it German chocolate. In 1915, Einstein published his theory of general relativity to factor gravity into the relativistic view of the universe.

This would mean that a sufficiently massive object like a star warps time and space through its gravity. So Einstein's theory altered the definition of gravity itself from a force to a warping of space-time. Scientists have observed the gravitational warping of both time and space to back this definition up.

Here's how: We know that time passes faster in orbit than it does on Earth because we've compared clocks on Earth with those on orbital satellites farther from the planet's mass. Scientists call this phenomenon gravitational time dilation. Likewise, scientists have observed straight beams of light curving around massive stars in what we call gravitational lensing.

So what does relativity do for us? It provides us with a cosmological framework from which to decipher the universe. It allows us to fathom celestial mechanics, predict the existence of black holes and chart the distant reaches of our universe.

Explore the links below to learn even more about cosmology.