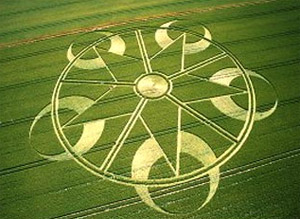 Most circles are concentrated in the south of England, primarily in the counties of Hampshire and Wiltshire. Many of them have been found near Avebury and Stonehenge, two mystical sites containing large stone monuments.

But crop circles are not confined to England. They have been spotted in the United States, Canada, Australia, Japan, India and other parts of the world.

The "season" for crop circles runs from April to September, which coincides with the growing season. Circles tend to be created at night, hiding their creators (human or otherwise) from curious eyes.

Crop circles can be found in many different types of fields -- wheat, corn, oats, rice, oil-seed rape, barley, rye, tobacco -- even weeds. Most circles are found in low-lying areas close to steep hills, which may explain the wind theory of their creation.

Now, let's get into some of the crop circle theories.