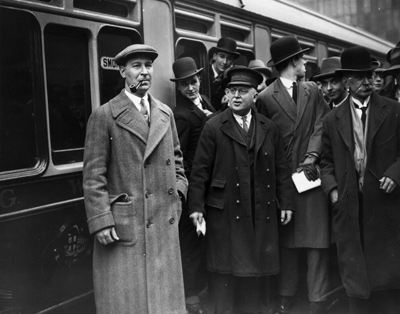 F. A. Mitchell-Hedges leaves for Central America to excavate the Mayan city of Lubaatun on January 6, 1926.
Topical Press Agency/Getty Images

Of all of the crystal skulls, the Mitchell-Hedges skull is probably the most infamous. The skull was allegedly discovered in the mid-1920s by Anna Mitchell-Hedges, the adopted daughter of a British adventurer and traveler named F.A. Mitchell-Hedges. Anna claims that she found the skull beneath the altar of a Mayan temple in Lubaantun, a ruined city in Belize, on her 17th birthday.

According to Anna, the Mayans told her that the skull was used to "will death" [source: "Arthur C. Clarke's Mysterious World"]. When a priest became too old to continue with his duties, he and his replacement would lie in front of the altar with the skull. After a ceremony, all of the elderly priest's knowledge would be transferred into the younger man. Then the old priest would die.

The Mitchell-Hedges skull is about 8 inches long, 5 inches wide and 5 inches high and made out of transparent quartz. It weighs around 12 pounds and has many of the details of a human skull, with ridges, cheekbones, a nose socket, a detached jawbone and deep eye sockets.

In 1936, a description of the skull appeared in the British journal "Man" (in comparison with another crystal skull owned by the British Museum), but its ownership was attributed to an art dealer named Sydney Burney. Anna explained that her father had actually left the skull in the keeping of Burney, who put it up for auction as payment for a debt in 1943. Mitchell-Hedges ended up paying Burney at Sotheby's auction house to get the skull back.

However, there's evidence that disputes Anna's claims and shows that Mitchell-Hedges bought the skull outright from Burney at Sotheby's. In "Secrets of the Supernatural," author Joe Nickell quotes a letter written by Burney to the American Museum of Natural History and dated 1933, which states "the rock-crystal skull was for several years in the possession of the collector from whom I bought it and he in his turn had it from an Englishman in whose collection it had been also for several years, but beyond that I have not been able to go" [source: Nickell].