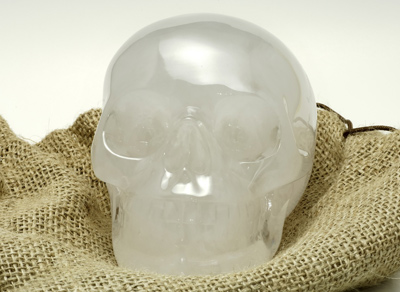 Believers in the power of crystal skulls have made some fantastic claims about their abilities. Anna Mitchell-Hedges claims that her skull was used for healing but has never been specific. The owner of “ET” believes that it helped to heal her brain tumor. Many people who have encountered the more well known crystal skulls describe them as giving off strong “psychic energy.”

Mitchell-Hedges has only allowed her skull out of her possession once, in 1970. Art restorer Frank Dorland studied the skull for six years. He claimed that he heard ringing bells and the sound of a choir singing. Dorland also said that he saw an aura around the skull and could see images when gazing into it.

Some crystal skull devotees point to the piezoelectric properties of quartz crystal as evidence of the skulls' power. They say that the skulls might function like large computer chips that have recorded the history of the Earth, or even messages from aliens or lost civilizations. We just have to discover the right way to “read” them.

Frank Dorland also made many other, less dubious, observations about the Mitchell-Hedges skull. He claimed that the skull showed signs of “mechanical grinding on the faces of the teeth” [source: Garvin]. Norman Hammond, a Mayan expert who examined the skull while appearing on a TV show with Anna Mitchell-Hedges, stated that it also had holes that were obviously drilled using a metal drill.

Dorland also claims to have taken the Mitchell-Hedges skull to Hewlett-Packard Laboratories to learn more about its composition. It was lowered into a vat of benzyl alcohol, where it became nearly invisible. This proved that the skull was actually quartz crystal (alcohol and quartz have the same diffraction coefficient, they both bend light waves at the same angle). Dorland states that the Hewlett-Packard researchers also determined that it was carved from a single piece of crystal and that it was carved without taking its axes into consideration. However, Hewlett-Packard has no record of these tests.

While appearing with her on Arthur C. Clarke's 1980 TV show “Mysterious World,” gem expert Allan Jobbins told Anna Mitchell-Hedges that he thought the skull comprised crystal that originated in Brazil (not known to have been inhabited by Mayans) and was probably worked after 1700.