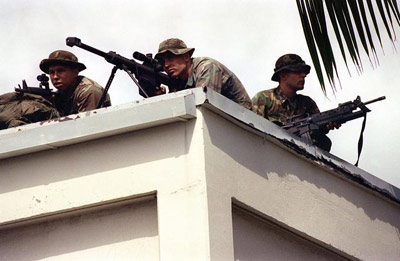 Since most of a sniper's time is spent on reconnaissance missions observing the enemy, his observational skills have to be flawless. USMC Scout Sniper School has developed some unique "games" to hone student snipers' ability to look at things critically. This section details the games used to teach advanced observational skills.

...they would put different objects on the table: a bullet, a paper clip, a bottle top, a pen, a piece of paper with something written on it -- 10 to 20 items. You'd gather around and they'd give you, say, a minute to look at everything. Then you'd have to go back to your table and describe what you saw. You weren't allowed to say "paper clip" or "bullet," you'd have to say, like, "silver, metal wire, bent in two oval shapes." They want the Intel guys making the decision [about] what you actually saw.

The KIMS game that Army Ranger Sniper describes is played repeatedly throughout the two-month course. As time goes by, students are given more objects to look at and less time to look at them. To add to the challenge, the time between seeing the objects and reporting what they saw gets longer as the course goes on. By the end, they may see 25 objects in the morning, train all day, and then at night be asked to write down descriptions of all the things they saw.

Another observation game happens in the field with a sniper scope. According to Army Ranger Sniper:

What they would usually do was hide things in a field, and you would just line up and have a certain amount of time to find them. There might be the tip of a pen hanging up out of the grass. You'd just have to look at every area in that field, you know, put your scope on it and just stare at it for a couple minutes, and move it over, stare at the next spot for a couple minutes. Basically, after a while, you do get really good where you can just pick these things out easy. You'd just look for things in the field that didn't add up.

Use the mouse to move the sniper scope around the field to locate the 10 hidden objects. Mouse over and click to shoot. Time yourself to see if you can do it in 30 seconds like a real sniper.

Snipers' observational skills tie into their main mission: reconnaissance. Such intense observational practice rewires a person's brain. Army Ranger Sniper explains, "Even just driving down the road now I see weird little things on the side of the road that a lot of people wouldn't really notice."

In the next section, we'll look at another critical element of the sniper's skill set: the stalk.

The name "KIMS game" comes from Rudyard Kipling's book "Kim," the story of an Irish orphan who grew up in India. As a young man, he was trained for government intelligence work. The training involved showing Kim a tray of stones and gems for one minute. After covering the tray, they would ask Kim how many stones he saw and what kind of stones they were.