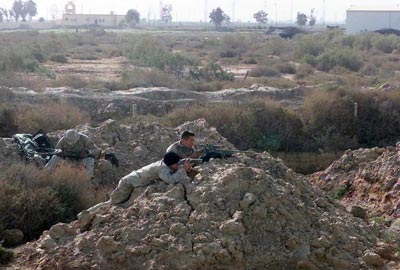 Stalk training is the component of sniper school that hones a sniper's stealthy approach. Snipers have to learn to move slowly, patiently and methodically. If necessary, snipers will lie for days in the same position to observe an objective or avoid detection. Army Ranger Sniper describes the intricate process:

When you're stalking, you would be amazed when you're on the ground the things you walk over and don't look at. When you're trying to sneak up on somebody, even an anthill looks like a mountain. You have pick out your positions -- the next place you're going to crawl to. You ask yourself, "Is that going to cover me when I get there, and how am I going to get there?

To develop this ability, snipers have to pass perhaps one of the most challenging training games -- the stalk.

Stalk training takes place in open grassy ranges. Students start at one end of the range. One thousand meters down range, two instructors sit on top of a truck or tower with spotter scopes. Sniper students must stalk toward the instructors without being seen. To add to the challenge, the instructors have two soldiers in the field called walkers. The instructors use radios to communicate with the walkers and try to find the sniper.

Students must stalk from 1,000 meters out to within 150 meters of the instructors, all the while avoiding detection by the instructors and the walkers. Once in position, they take a shot (they are firing blanks). They must take this shot carefully because if their muzzle flashes or kicks up dirt, then they can be easily spotted. After the first shot, the snipers must stalk to a second firing position and take a second shot. To verify that the snipers were actually sighting the instructors, the snipers must read the card or count the number of fingers the instructors are holding up. Stalk training is a pass or fail game. If the sniper is spotted at any point, he fails the game. Too many fails, and the student washes out of the program.

Of course, training exercises are different from deployment. Army Ranger Sniper explains it this way:

Anywhere, any time, snipers are prepared to use their specialized skills to sneak into dangerous situations and disable an enemy force through a combination of close reconnaissance and deadly long-range fire. When we asked Army Ranger Sniper if there was one thing he really wanted to get across to our readers about snipers, his response was, "Let people know that snipers aren't assassins, you know, kids always think that. Snipers aren't just assassins who sneak in, kill a general and sneak out ... that's what all the movies always show. That may happen, but it's very rare."

Check out the next page for more great information on snipers and related topics.