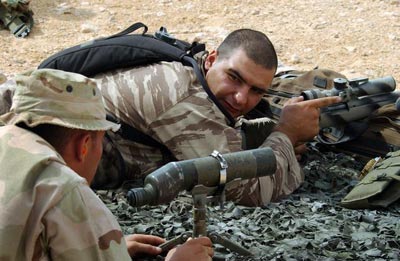 Once the shot is taken, the spotter watches the shot to help the sniper readjust his aim or his position in the unlikely event that he misses his target. The way that the spotter watches the shot is fascinating. High velocity, long-range rounds like the kind used in a sniper rifle actually leave a vapor trail as they fly through the air. The spotter can track the shot by watching for that vapor trail. Army Ranger Sniper says, "It just looks like mixed up air. You can see through it, but you see the distortion."

In observation missions, the two can take turns using the spotter scope to spy on the enemy. This helps to avoid eye fatigue and allows one team member to rest while the other watches. This is important, since in many cases they can be out there observing for days at a time.

The most important job of the spotter is to protect the shooter and the team. For this task, the spotter shoulders an automatic assault rifle like an M-4 or M-16. Army Ranger Sniper explains why this added firepower is important: "If you're sitting there and you get attacked, a sniper rifle is not real good for fighting your way out."

The relationship between a sniper and his spotter is very important. First and foremost, the two depend on each other for survival. Sniper teams work in the no-man's-land between or behind battle lines. They often have little or no support from their unit, and if they don't accomplish their mission, the safety of the whole platoon may be compromised.

Being the spotter in a sniper team is a sort of sniper apprenticeship. The sniper is the team leader. He coordinates with command to put together the mission. In the field, he has the final word in determining the route, position, rendezvous point and escape route. A spotter learns in the field from his sniper and then eventually gets his own team to lead.

In the next section, we'll learn about the tools that sniper teams use to get the job done.