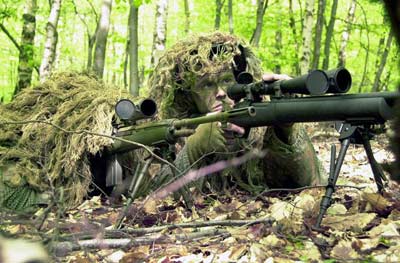 As part of a training exercise, the members of a sniper team man a 7.62mm Springfield Armory M21 Sniping rifle (left) and sights through the scope of a 7.62mm M24 Sniper rifle (right).
Photo courtesy Department of Defense Defense Visual Information Center

"One shot, one kill" is the sniper motto. Accomplishing this would not be possible without the specially modified rifles used by snipers in the field. A sniper rifle such as the M-21 or PSG-1 in the hands of a highly trained sniper can be a deadly weapon from more than a mile away. Army Ranger Sniper used an M-21: "It was a military M-14 with match-grade upgrades -- hollowing out the wood, fiberglass-seated receiver, different trigger mechanisms and optics."

Match grade means the rifle has been fine-tuned by a professional gunsmith to ensure the highest possible accuracy and reliability. Match-grade rifles are also used for competitive shooting. A match-grade rifle coupled with handmade, match-grade ammunition ensures the consistency that is so important for a marksman.

In addition, sniper rifles sport a free-floating barrel to ensure that the barrel touches the least amount of the weapon possible. This reduces vibration from the recoil. Also, sniper rifles are usually designed or modified to incorporate fiberglass or composite stocks to avoid the effect of humidity on the receiver. Any swelling of the wood can affect the accuracy of the shot.

Sniper rifles are generally bolt-action rifles. That means the sniper must load and chamber each round he fires. Once he has fired, he has to clear the shell casing and load another round. Though they are more difficult to operate and have a much slower rate of fire, bolt-action rifles are preferred because they have fewer moving parts than automatics. There are semi-automatic sniper rifles, though, such as the M-21. Army Ranger Sniper had this to say about how the nature of the different rifles can affect a sniper in the field: "If you fire something on a bolt action, you have to reload one, and that movement could give you away. But also, the round flying out of the rifle could give you away on the semi-automatic." In the end, it comes down to the personal preference of each sniper.

There are many different types of sniper rifles manufactured by countries all over the world. On average, they cost between $8,000 and $15,000.

For one of the most comprehensive sources on sniper rifles, check out Sniper Rifles of the World.