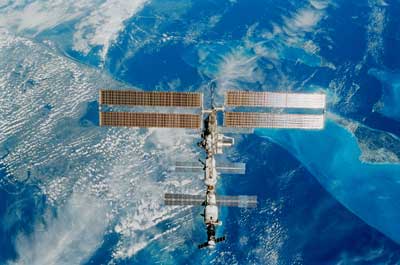 Space-farming research usually focuses on plants that have a high yield of edible parts and can flourish in small spaces. Researchers have begun to grow a variety of plants in space, including thale cress, lentils, wheat, leafy salad plants, field mustard plants and soybeans.

And with these plants, researchers are determining how space-farming operations of the future will function. Plants still need all the basics they receive on Earth -- water, carbon dioxide and nutrients. Though plants can live with little gravity, it's best for them to have at least a small amount to prevent any growth problems. Artificial gravity, produced by a mechanical centrifuge, helps solve this problem. Experiments that control the amount and duration of artificial gravity help researchers determine how much gravity affects the direction of root growth. Luckily, the moon and Mars both have some level of gravity, which will aid in sustaining plant life on these celestial bodies.

The results of the research so far have been mixed. In some cases, the plants and seeds cultivated and returned from the ISS mirrored the ground-based control group. In other experiments, they were similar but slightly taller or larger. In still more tests, researchers noted significant differences between the plants grown in microgravity and those under regular gravity.

For example, results from studying NASA's Biomass Production System (BPS) found that while the two sets of plants grew similarly, the immature seeds grown on the ISS were developing at varying rates. The control group's seed development rates were all the same. Elements like seed protein and soluble carbohydrates in the ISS seedlings existed at different levels than those of the ground control group. Researchers noted this might change the taste of space-grown food.

It's important to note, however, that the mixed results may be explained because of the diversity of control factors (like temperature, light and humidity) in the different experiments, the different growing apparatuses, and the fact that plants can just be plain difficult to grow.

Now that we have examined the trials of space-farming research, let's look closer about why this research is so fundamental to future space exploration.

One Giant Leap for Grasshoppers

Whether or not they have wings, some insects might get the chance to fly if selected to go in space and become part of the space-farming research. Though many plant parts are inedible for humans, they make a delicious meal for insects. Insects can convert much of this inedible material into something more useful, like fertilizer.

These bugs also provide an excellent source of nutrients for people or animals in space. A grasshopper might be a welcome, if not crunchy, change for astronauts subsisting on dehydrated meals. And, some insects could have additional benefits on long-term space voyagers. For example, the silk produced by silkworms can be woven into rope and clothing.