The Impact of Space Farming 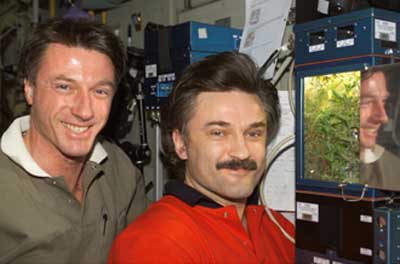 Astronauts C. Michael Foale (left) and Alexander Kaleri, part of the Expedition 8 crew aboard the ISS, pose next to the Lada greenhouse.
Photo courtesy NASA

Though much of the research conducted by NASA and other space agencies is important to the space programs, the impact of space farming has many real-life applications for Earth.

The main benefit and purpose of learning how to farm in space is to enable long-term space exploration -- it's critical that astronauts have a regenerative food source. Imagine going on vacation for a year and having to pack all the meals you planned on eating -- your car would be completely stuffed with groceries.

Plants can assist the life support system in other ways too. They can be used to purify water and recycle carbon dioxide into oxygen. If grown on a large-enough scale, plants could hugely impact how spacecraft and colonies are designed.

Back here on Earth, the impact of space farming will expand our knowledge of agriculture. Researchers hope to transfer what they learn about growing food in the inhospitable climate of space to equally challenging and hostile climates on Earth. They are collecting detailed information about how plants grow and hope this information will help as land becomes scarcer and less fertile. Goals include higher quality crops, higher crop yields and better controlled agricultural systems and greenhouses.

Space farming has led to some other surprising and useful applications here on Earth. One is a special device called Bio-KES which converts ethylene into carbon dioxide and water using ultraviolet light. Ethylene causes plants to ripen and eventually spoil. A device like Bio-KES, used in food storage units and display cases, could help increase the shelf life of produce, flowers and other perishable items. Ultraviolet light has other applications besides helping to reduce the amount of rotten food we must discard. It can also be used to kill pathogens like anthrax, help wounds heal faster and improve the effectiveness of some cancer treatments.

Another area which could have unexpected consequences involves the study of plants' cell walls. Through space farming, scientists may discover how to control and regulate how sturdy a plant will grow. Some plants might benefit from this research in regards to better weather durability. In addition, trees with less-sturdy cell walls would grow faster and be easier and cheaper to process into paper. These genetically-modified trees could help slow deforestation by becoming reliable, quick-growing resources for paper production.

Lastly, plants seem to improve the psyche. Just as gardening and strolling through the park can put you in a good mood here on Earth, the same goes for our space-bound counterparts aboard the ISS. Plants and a lush environment can both stimulate the senses and produce a calming effect. For example, astronauts used plants as therapeutic devices after their colleagues perished in the Columbia disaster [source: Quinn]. Researchers plan to study the psychological effect of plants by following the length of time each astronaut spends gardening and cultivating plant life.

Space farming will affect our future chances of survival on the rugged Martian terrain, and our ability to feed Earth's ballooning population. For more information about space farming, visit the links below.