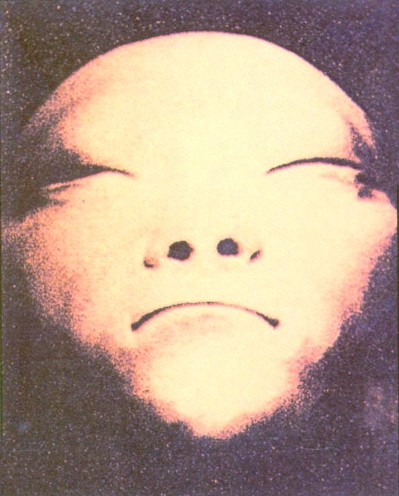 This dubious photograph of unknown origin purports to show the face of a dead alien. Similar pictures have proliferated in the wake of revived interest in stones of crashed UFOs and cover-ups.
Intercontinental U.F.O. Galactic Spacecraft Research and Analytic Network Archives

It wasn't just metal that had arrived at Wright Field.

As they reconstructed the unknown craft's trajectory, military investigators concluded it had come in from the southeast (in other words, from the Roswell area). Two and a half miles southeast of the debris field, looking down from a reconnaissance aircraft, searchers spotted a second, smaller, relatively more intact though undeniably crashed, machine. Sprawled near it were four bodies. They were not the bodies of human beings.

This aspect of the Roswell story is the most fantastic, unbelievable, and difficult to document. The Air Force went to extraordinary lengths to hide it even from some of those who participated in the recovery of the material at the first site. Yet from t­he meticulou­s (and ongoing) research of Schmitt and Randle, we get the testimony of credible individuals who were involved, directly or indirectly, with the recovery of extraterrestrial remains. According to Exon, who heard the story from Wright personnel who had examined the bodies at the base, "they were all found . . . in fairly good condition," even though they had lain there for six days (they were discovered on July 8) and varmints had chewed on some of the soft organs.

Those who participated in the recovery of the bodies have provided consistent descriptions of what these "extraterrestrial biological entities" (the official designation, according to some unconfirmed accounts) looked like. They were four to five feet tall, humanoid, with big heads, large eyes, and slitlike mouths. They were thin and had long arms with four fingers. An Army nurse who worked on the initial autopsy at Roswell remarked on how fragile the skull and bones were. Within hours the bodies were put into large sealed wooden crates, loaded into the bomb pit of a B-29, and flown to Fort Worth Army Air Field. From there they went almost immediately to Wright Field.