The Life of a Star 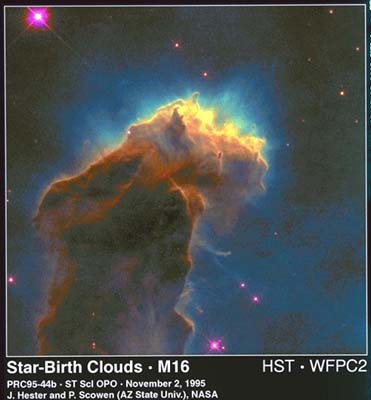 As we mentioned before, stars are large balls of gases. New stars form from large, cold (10 degrees Kelvin) clouds of dust and gas (mostly hydrogen) that lie between existing stars in a galaxy.

The young star is now stable in that the outward pressure from hydrogen fusion balances the inward pull of gravity. The star enters the main sequence; where it lies on the main sequence depends upon its mass.

Now that the star is stable, it has the same parts as our sun:

However, the interior may vary with respect to the location of the layers. Stars like the Sun and those less massive than the sun have the layers in the order described above. Stars that are several times more massive than the sun have convective layers deep in their cores and radiative outer layers. In contrast, stars that are intermediate between the sun and the most massive stars may only have a radiative layer.

Life on the Main Sequence

Stars on the main sequence burn by fusing hydrogen into helium. Large stars tend to have higher core temperatures than smaller stars. Therefore, large stars burn the hydrogen fuel in the core quickly, whereas, small stars burn it more slowly. The length of time that they spend on the main sequence depends upon how quickly the hydrogen gets used up. Therefore, massive stars have shorter lifetimes (the sun will burn for approximately 10 billion years). What happens once the hydrogen in the core is gone depends upon the mass of the star.