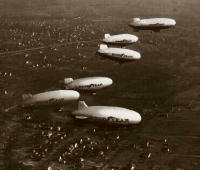 In 1783, two French brothers, Jacques Etienne and Joseph Michel Montgolfier, invented the hot-air balloon and sent one to an altitude of 6,000 ft (1,800 m). Later that year, the French physicist Jean Pilatre de Rozier made the first manned balloon flight. While balloons could travel to high elevations, they could not travel on their own propulsion and were at the mercy of the prevailing winds. The shape of the balloon was determined by the pressure of the air or gas (such as hydrogen or helium).

The rigid airship had a metal framework -- 420 ft (123 m) in length, 28 ft (12 m) in diameter -- containing hydrogen-gas-filled rubber bags. The first Zeppelin had tail fins and rudders, and was powered by internal combustion engines. It carried five people to an altitude of 1,300 ft (396 m) and flew a distance of 3.75 mi (6 km). Several models of Zeppelins were built in the early 1900s. These vehicles were used for military and civilian purposes, including transatlantic travel. The most famous Zeppelin was the Hindenburg, which was destroyed by a fire in 1937 while landing at Lakehurst, New Jersey. See Fall of the Hindenburg to learn about the ship and the crash.

In 1925, Goodyear Tire & Rubber Company began building airships of the blimp design. These aircraft were used for advertising and military purposes (such as surveillance and anti-submarine warfare) throughout World War II. In 1962, the U.S. military stopped using blimps in their operations. Today, blimps are used mainly for advertising, TV coverage, tourism and some research purposes. However, the airship is coming back.

For more information on airships and related topics, check out the links below.

All airships have solid gondolas, engine-powered propellers and solid tailfins.