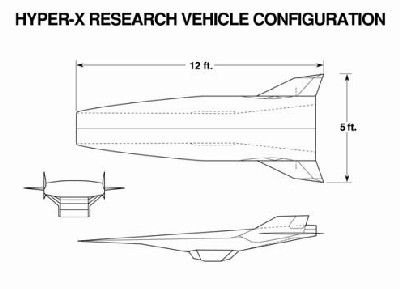 The dimensions and views of the X-43A
Photo courtesy NASA

The best way to understand an X-43A’s air-breathing engine is to first look at a conventional rocket engine. A typical rocket engine is propelled by the combustion created when a liquid oxidizer and a hydrogen fuel are burned in a combustion chamber. These gases create a high-pressure, high-velocity stream of hot gases. These gases flow through a nozzle that further accelerates them to speeds of 5,000 to 10,000 mph (8,000 to 16,000 kph) and provides thrust. For more information on rocket engines, check out the article How Rockets Work.

An air-breathing engine requires no onboard oxygen. The X-43A scoops up oxygen as it flies through the atmosphere. In an Earth-to-orbit mission, the vehicle would store extra oxygen onboard, but less than what a space shuttle requires.

The scramjet engine is a simple design with no moving parts. The X-43A craft itself is designed to be a part of the engine system: The front of the vehicle acts as the intake for the airflow, and the aft serves as the nozzle that accelerates the exhausted air.

Artist's concept of the X-43A in flight, with the scramjet engine firing
Photo courtesy NASA

Combustion occurs in the engine only at supersonic speeds because the air has to be flowing at a high rate to be compressed. Rather than using a rotating compressor, like a turbojet engine does, the forward velocity and aerodynamics compress the air into the engine. Hydrogen fuel is then injected into the air stream, and the expanding hot gases from combustion accelerate the exhaust air to create tremendous thrust.