"Destroy All Monsters," a classic sci-fi movie from Japan's Toho Studios, predicted that mankind would colonize the moon by the year 1999. Needless to say, that didn't happen — and it still hasn't happened all these years later. But there have been serious talks about the feasibility of building a permanent lunar outpost or settlement. (A set of scientific papers released in 2016, for example, argued that a small moon base could be finished at a cost of $10 billion as soon as 2022.)

Imagine what life would be like for the settlers up there. Among the many things they'd need to get used to are the long, cold nights that Earth's moon experiences . Yet despite the frigid temperatures, some lunar areas have brightly lit nighttimes. For those who dream of following in Neil Armstrong's footsteps, here's a short guide to lunar nights and lunar days.

With apologies to Pink Floyd, there is no permanent dark side of the moon. There is, however, one side of the moon that never faces Earth head-on. The moon completes a full, 360-degree orbit around our planet every 27.32 days (relative to the stars we can see from our home planet). That's about as long as it takes the moon to finish a single rotation on its own axis. Taken together, those two factors explain why only one side of the moon is ever oriented toward us and about 41 percent of the lunar surface is never visible to Earth-bound stargazers.

But no matter where the moon is in its orbit at any given moment, half of it is constantly being illuminated by the sun. The relative positions of the sun and Earth dictate our moon's phases. Now let's suppose that all three bodies have become arranged into a straight line. Let's also assume that the moon is in between Earth and the sun. The moon's near side doesn't get any sunlight under those circumstances — and from our perspective, it appears to go dark. This phase is called a "new moon."

A "full moon" happens when the moon and sun fall on opposite sides of Earth. With the benefit of unimpeded solar light, the entire near side shines like a moon at this point in the lunar orbit. Keep that little tidbit in mind; we're going to revisit it later.

If we define a "day" as the amount of time it takes the sun to return to the same point on the moon's horizon after the moon completes a new revolution around Earth, then every lunar day lasts for 29.5 Earth days. This means that — on every orbit — the moon gets a little over two weeks' worth of daylight followed by an equal amount of nighttime. In other words, almost any given spot on the moon sees two weeks of continuous daylight followed by two weeks of continuous darkness.

An interesting exception can be found near the poles. Earth is tilted 23.5 degrees on its axis, but the moon has a less dramatic axial tilt of just 1.6 degrees. Ergo, the satellite's axis is almost perpendicular to the path taken by solar light as it travels from our sun to the moon. Close to the lunar poles, there are some deep craters whose bottoms haven't seen any sunlight in more than 2 billion years. They are quite literally "where the sun don't shine."

Without an atmosphere to retain heat, lunar temperatures fluctuate like crazy during the moon's daylight-to-nighttime transition. The moon's surface can be as hot as 260 degrees Fahrenheit (127 degrees Celsius) while it's being illuminated by solar light. But when the surface goes dark, the temperature may plummet all the way down to -280 degrees Fahrenheit (-173 degrees Celsius).

Fortunately, no astronaut has ever had to suffer through these lunar temperature extremes. NASA's Apollo missions put Neil Armstrong and 11 other people on the moon from 1969 to 1972. All of these brave explorers landed there just after lunar dawn, when the moon was lit, but the surface temperature had yet to reach its sweltering, midday apex. Timing is everything on astronaut adventures.

Look on the Bright Side

The universe is a place of limitless perspectives. Just as we observe lunar phases from our houses and backyards, an astronaut standing on the near side of moon would see planet Earth wane and wax. This Earth phase cycle stands in direct opposition to the lunar phases everyone's familiar with. For example, if the lunar astronaut we just mentioned went stargazing on the night of a full moon, our blue planet would be almost completely dark.

Conversely, when Earth looks "full," it dramatically brightens the nighttime lunar surface on the moon's near side. You may know that moonlight is nothing more than sunlight reflected off that satellite's surface. Well our planet reflects sunlight in much the same way. As a matter of fact, a "full Earth" looks 43 to 55 times brighter on the moon than a full moon does on planet Earth.

Earthshine is the name given to sunlight that has bounced off the deserts, clouds and icecaps of the blue planet we call home. You don't need to put on a spacesuit — or buy a telescope — to see this phenomenon in action. During the crescent moon phase, a C-shaped sliver of the lunar surface is brightly lit. Yet you may also notice that the rest of the moon is faintly visible to the naked eye as well. That visibility is made possible by good old earthshine.

And get this: Since the satellite doesn't have an atmosphere, stars are always visible from both sides of the moon, even when the sun is out. Of course, as the moon rotates around its axis and orbits Earth, different stars pop into view across the sky. Yet when viewed from the moon, the stars would not appear to twinkle. Twinkling — also known as "astronomical scintillation" — is a light illusion caused by Earth's atmosphere. With no Earth-like atmosphere to interfere with starlight, the stars do not twinkle on the moon.

Who knows? Maybe someday soon, moon-based settlers will get to bask in the radiant light of a full Earth on a star-filled lunar night. They'll just want to bundle up before heading outside.

NOW THAT'S Crazy
Apollo 11 astronaut Edwin "Buzz" Aldrin has the distinction of being the first man to urinate while standing on the moon. With the world watching his every step, Aldrin discreetly peed into a special tube that was concealed inside his spacesuit.

Temps in National Parks Increasing Much Faster Than Rest of U.S. 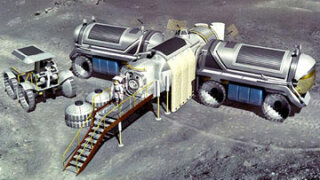 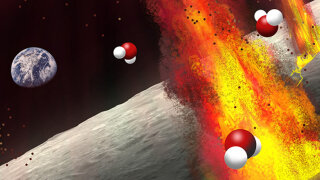 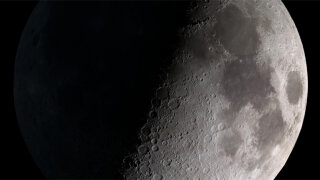