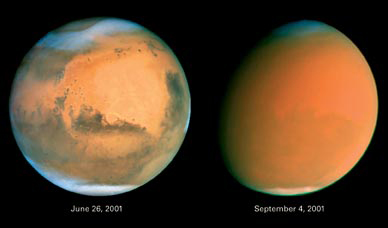 Mars, which is the fourth planet from the sun and the third smallest in size, got its name because of its rusty red color. People associated the planet's blood-red color with war, so they named it Mars, after the Roman god of war. There's a simple explanation for Mars's red color: its soil contains iron oxide, better known as rust.

No other planet in our solar system has caused as much speculation as this red dot in the night sky. Among the reasons for all the speculation are the dark and light features on Mars that can be seen using only a medium-size telescope. And, with good viewing conditions, you can see that Mars has light red areas and darker areas that seem to be connected in some way. Also, polar ice caps come and go with Mars's seasons.

Mars has two very small moons, Phobos and Demos, which are named for the horses that pulled the Roman god's chariot. These moons were probably asteroids captured by the planet's gravitational pull when they came too close to Mars.

The top of Olympus Mons is pictured above. This is the largest mountain in our solar system. It is an extinct volcano that is more than three times taller than Mount Everest. The depressions in this picture are called "caldera pits."
Photo courtesy of NASA

The journey from Earth to Mars takes about six months. The Martian day is about the same length as an Earth day. Its year is 687 Earth days. And the surface is very dusty. In fact, occasional high winds can cause dust storms so large, they can cover the whole planet.

Mars has many interesting features on its surface, including the largest volcano in the solar system, Olympus Mons. It is so large, it dwarfs Mount Everest here on Earth. Thankfully, Olympus Mons is inactive. Mars's Valles Marineris canyon is 11 times longer and four times deeper than the Grand Canyon in Arizona. All of this, and much more, makes up a planet about half the size of Earth.

For centuries, people have discussed whether or not there is life on Mars. Since it is so close to Earth, perhaps the climate would be liveable. Maybe some of the lines that can be seen on its surface are actually rivers of water, which is necessary for life. But on July 4, 1997, the NASA Pathfinder rover landed on Mars. It carried a smaller robotic rover called Sojourner that roamed the planet, sending back incredible pictures of the surface of Mars. The Mars spacecraft visitors tested the soil in search of signs of life and found none.

But the scientific information did not settle the age-old debate, and many theories, pro and con, still exist. For example: The lack of life found by Sojourner only shows there was no life specific to the site of the robot. Because of Mars's many dormant volcanoes, some astronomers think that when they were active, lava and steam poured from them. When the steam cooled, it fell as rain, feeding rivers. (It is thought that large, moving rivers once crossed the surface of Mars.) On Earth, life-forms exist in water, so, at one time, life may have existed in the Martian rivers.

Still other scientists think there is no life on Mars because the planet has no liquid water today. Water seems to exist there only as ice, in the polar ice caps and perhaps under the Martian soil. Also, the Martian atmosphere is very thin, causing temperatures on Mars to average well below zero. Inhospitable winds rage across the surface at very high speeds. It does not offer a friendly environment in which to live.

Then, on January 4, and January 25, 2004, NASA's twin exploration rovers landed on Mars, serving as robotic geologists. They continued NASA's search for signs of life, sending back daily images from the panoramic cameras they each carried. The rovers (named Spirit and Opportunity) landed at different places, enabling them to use their special instruments to take soil samples from two areas. Their payloads, which also showed no signs of life, haven't really settled the debate over life on Mars, but the information and images they relayed make the conversations much more colorful.

Astronomers Determine When 'Cosmic Dawn' Happened
Good News, Mars Colonists: Pure Water Ice You Can Dig Up With a Shovel
Interstellar Asteroid 'Oumuamua Has Loads More to Tell Us