Can We See Atoms? 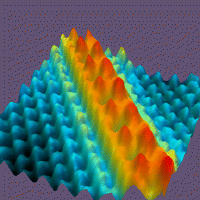 Atoms are so small that we cannot see them with our eyes (i.e., microscopic). To give you a feel for some sizes, these are approximate diameters of various atoms and particles:

You cannot see an atom with a light microscope. However, in 1981, a type of microscope called a scanning tunneling microscope (STM) was developed. The STM consists of the following:

The process is much like an old phonograph where the needle is the tip and the grooves in the vinyl record are the atoms. The STM tip moves over the atomic contour of the surface, using tunneling current as a sensitive detector of atomic position.

The STM and new variations of this microscope allow us to see atoms. In addition, the STM can be used to manipulate atoms as shown here:

Atoms can be moved and molded to make various devices such as molecular motors (see How Nanotechnology Will Work for details).