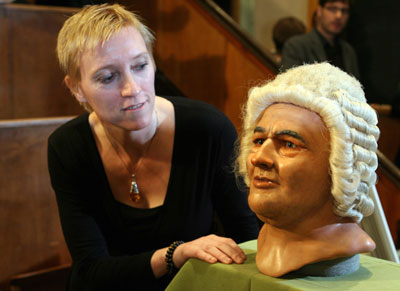 Depending on how deep a coffin is buried, the body inside may be completely stripped of its tissue or flesh within 40 to 50 years. Bodies left unprotected from the elements will decompose to a skeletal state much sooner. However, it may take hundreds of years for bones to decompose entirely.

Although most bodies are discovered long before dust has returned to dust, enough time -- anywhere, say, from a few days to many years -- has often passed that it's impossible to visually determine the identity of a body found under mysterious circumstances. Skin, muscle and other tissue matter may have decomposed and been consumed or scattered by wild animals. What's most likely to remain is the skeleton, and that's often where the answers must be found.

Forensic anthropology is the study and analysis of human remains for purposes of assisting a criminal investigation. Forensic anthropologists provide information about the origin and identity of a body and the means and time of its death. Forensics has many different branches -- everything from forensic entomology (study of insect evidence) to odontology (analysis of dental evidence). A forensic anthropologist may consult and confer with an odontologist, for example, to more accurately determine an age range for a human skull.

When a body is discovered, a forensic anthropologist is summoned to the crime scene to help find and collect the human remains. It's not always as simple as it sounds. There may be two bodies tangled together in a shallow grave, or the body may be located among animal bones left by hunters. The forensic anthropologist will separate the bones from other matter, take them back to a lab, clean them and examine them. Analysis is complicated by countless factors. For instance, trauma to a bone may have been caused by a struggle with the killer -- or it could just be the result of a childhood accident. A forensic examination of the body can help determine which may be the case. Forensic anthropologists also provide court testimony about their findings -- reaffirming for the record their professional opinion on the identity or profile of the individual and the presence of bone or skull trauma.

When forensic scientists are represented on televised crime dramas, their roles are often combined and exaggerated. A forensic anthropologist studies only the bones and decomposed remains of an individual -- not the mysterious, bloody note clenched in a fist, the half-chewed bubble gum in the victim's mouth or the peculiar pattern of a bloodstain on the wall behind the body. Some tasks not handled by forensic anthropologists include:

So even if forensic anthropologists don't really cover all the ground they do on TV, they still have their work cut out for them. And to correctly analyze corpses, they've got to learn about decomposition. It helps to have firsthand experience -- that's where body farms come in. Body farms are like a hands-on laboratory where forensic anthropology students can learn about the environment's effects on a body, as well as observe the decomposition process up close. On the next page, learn about the colleges that consider a field full of rotting bodies to be a bountiful harvest.­