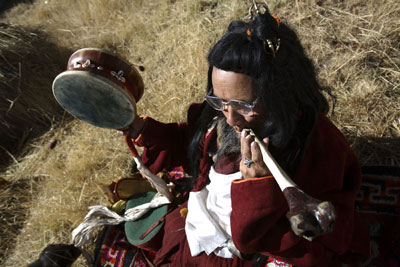 A burial master blows a horn made of human bone to pray for the dead during a sky burial ceremony at the Chanlang Temple on Nov. 1, 2007.
China Photos/Getty Images

Leaving dead bodies out in the open isn't for everyone. Beliefs and traditions concerning burial of the dead vary greatly across cultural, religious and geographic divides. The ancient Egyptians maintained elaborate ceremonies and funerary preparations, such as embalming the dead, which is still common today. Tibetan Buddhists may opt for a sky burial, in which one's remains are left exposed to be consumed by vultures. Some people plan to be cremated when they die while others may find the thought of destroying their body by fire -- even after they're dead -- to be disturbing.

Some citizens in San Marcos, Texas, balked when they learned that nearby Texas State University planned on building a body farm. Concerns were raised about smell, possible unsightliness and even the chance of coyotes redistributing decaying body parts around town. When a new site was proposed, it was a notably Texas-style problem that halted construction -- buzzards. Citizens feared that the body farm would attract buzzards and other birds of prey, and that these creatures would be a risk to low-flying aircraft taking off and landing at a nearby airport. Texas State University assuaged concerns by announcing that the body farm would be located within a 3,000-acre property and would be at least a mile away from any properties that border the site. The isolation and privacy of this final location satisfied local residents.

Another common fear associated with body farms is contamination or the spread of disease. The faculty in charge of running these decomposition facilities do everything they can to alleviate such worries. Body farms don't accept any bodies that test positive for infectious diseases. Additionally, anyone who has proximity to corpses must have a round of vaccinations to prevent catching hepatitis, tetanus and other diseases. The bodies themselves, though, actually prevent disease from spreading. When bodies go through the putrification process, disease-causing organisms also decompose, rendering the remains harmless.

More body farms are needed across the nation because research done on corpses in any given environment provides the most applicable data to bodies found under those same environmental conditions. While this may not pose a problem for bodies found in states like Georgia or Virginia, the effects of decomposition vary greatly for a body in a desert climate, such as Arizona or New Mexico. This specific problem spurred the creation of the Texas body farm. Ideally, there would be at least one body farm operating in each state -- but it may take many more years for that goal to be realized.

For body farms to exist, there have to be bodies -- and yours could be one of them. If you want to donate your body to a forensic anthropology facility, you should make arrangements with the body farm of your choice before you die. You should also tell family members or an attorney about your decision so that the body farm can be notified of your death -- and the farm's imminent acquisition. Generally, the university will collect the donated body after funeral services have been held. However, depending on the distance between the body and the university, it may be necessary for your estate to pay to ship your body.

In the next section, we'll look at some mysteries solved through skills and knowledge being learned at body farms.