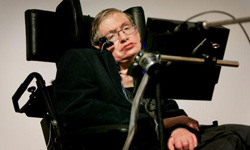 From some of his scientific beliefs to works he's written, there are a few things you might not have guessed about world-renowned physicist Stephen Hawking.
Bruno Vincent/Getty Images

Even if you don't keep a close eye on new developments in physics, you've probably heard of the renowned physicist Stephen Hawking. He prided himself on making his complex physical concepts accessible to the public and writing the bestseller, "A Brief History of Time."

And if you are a fan of Conan O'Brien, "The Simpsons" or "Star Trek," you might have seen him brandishing his cool wit during guest appearances on those shows.

Even if you are familiar with his academic work, however, there are many interesting facts you might not know about Hawking, stretching from his time at school and gradual development of disability to his opinions on the future of the human race.

Many find it surprising, for instance, that, despite his influential body of work, Hawking was never awarded the Nobel Prize. We'll talk about some of the remarkable distinctions he did receive, however.

Another interesting fact: Hawking was born on Jan. 8, 1942, which just happened to be the 300th anniversary of Galileo's death.

But this has just been the warm-up. Next, we'll delve into some fascinating and unexpected facts about Hawking, including some things about his profoundly inspirational story.