by Jane McGrath
Prev NEXT
8

Was on Oxford Rowing Team 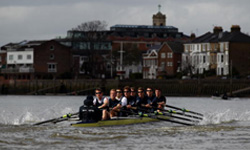 Oxford University's rowing club practices for a race in 2010. Hawking had served as the coxswain for the school's team nearly five decades earlier.
Richard Heathcote/Getty Images

Biographer Kristine Larsen writes about how Hawking faced isolation and unhappiness during his first year or so at Oxford. The thing that seems to have drawn him out of this funk was joining the rowing team.

Even before being diagnosed with a physically disabling illness, Hawking didn't have what one would call a large or athletic build. However, row teams recruited smaller men like Hawking to be coxswains -- a position that does not row, but rather controls steering and stroke rate.

Because rowing was so important and competitive at Oxford, Hawking's role on the team made him very popular. Remembering Hawking from those days, one fellow boatsman called him "the adventurous type" [source: Larsen].

But as much as the rowing team helped his popularity, it hurt his study habits. Occupied with rowing practice for six afternoons per week, Hawking started "to cut serious corners" and used "creative analysis to create lab reports" [source: Larsen].