by Jane McGrath
Prev NEXT
4

Had Numerous Awards and Distinctions 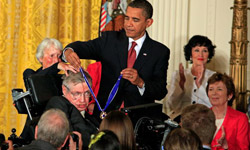 In his long career in physics, Hawking racked up an incredibly impressive array of awards and distinctions. We don't hope to be exhaustive in this small space, but we'll go over some of the highlights.

In 1974, he was inducted into the Royal Society (the royal academy of science in the U.K., dating back to 1660), and a year later, Pope Paul VI awarded him and Roger Penrose the Pius XI Gold Medal for Science. He also went on to receive the Albert Einstein Award and Hughes Medal from the Royal Society.

Hawking had so well established himself in the academic world by 1979 that he attained the post of Lucasian Professor of Mathematics at the University of Cambridge in England, a position he would keep for the next 30 years. The chair dates all the way back to 1663, and the second person to hold it was none other than Sir Isaac Newton.

In the 1980s, he was invested as a Commander of the British Empire, which is a rank in the U.K. just under being knighted. He also became a Companion of Honour, which is another distinction given in recognition of national service. There can be no more than 65 members of the order at one time.

In 2009, Hawking was awarded the United States' highest civilian honor of the Presidential Medal of Freedom.

All the while, Hawking attained at least 12 honorary degrees. However, the Nobel Prize eluded him.