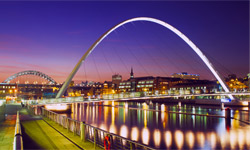 Millennium Bridge at dusk, viewed from Gateshead over the River Tyne to Newcastle upon Tyne
Brian Lawrence/Getty Images

In a bascule bridge, one or two pieces of the bridge deck, known as leaves, swing up to provide clearance for boat traffic passing underneath. They open quickly and efficiently but aren't the most elegant pieces of architecture. This was the challenge facing engineers when officials in Gateshead, England, announced a contest in 1996 to design an innovative cycle and pedestrian bridge to span the Tyne River. The new structure had to allow ships to pass underneath without blocking the view of other nearby bridges or interfering with cultural activities taking place on either bank.

The winning design solved the problem, not with a bascule-type system, but with a never-seen-before tilting mechanism. Here's how it works. The bridge is made up of a pair of steel arches. In its "down" position, one arch forms the deck of the pedestrian and cycle path. The other arch sits at a 90-degree angle to the first, with cables strung between the two to provide support for the deck. When the bridge needs to move to its "up" position, eight electric motors tilt both arches as a single, rigid structure. As one arch lowers, the other rises to act as a counterbalance.

When the 413-foot- (126-meter-) long bridge opened in 2000, 36,000 people lined the banks of the river to watch the bridge's inaugural tilt [source: Gateshead Millennium Web site]. And in 2007, its likeness appeared on a new pound coin from the Royal Mint.

Our next entry -- the tallest vehicular bridge in the world -- also wowed people when it opened in 2004.