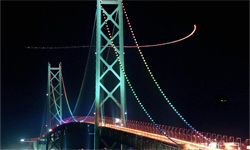 The Akashi Kaikyo Bridge may lose its title as the world's longest suspension bridge. A proposed bridge over the Strait of Messina that would link Sicily to mainland Italy could steal its title.
AP Photo/Kyodo News

Japan is both a bridge-building dream and a nightmare. Japan consists of four main islands and 4,000 smaller islands -- a veritable mother lode of options and opportunities for bridge crossings. Unfortunately, Japan is also located in the Ring of Fire, an area where large numbers of earthquakes and volcanic eruptions occur. That makes building big structures a supreme engineering challenge. With the Akashi Kaikyo Bridge, Japanese engineers were up to the challenge.

The Akashi Kaikyo Bridge opened in 1998 and stunned the world with its epic size. It spans 2.4 miles (3.9 kilometers) across the Akashi Strait, with a central section stretching almost half of that length. Its towers soar 928 feet (283 meters) above the water, and its cables carry tensile forces of 132,000 tons (120,000 metric tons). It's not just the crowning glory of Japan's elaborate bridge system; it's the longest spanning suspension bridge, with the highest towers, in the world. What makes the Akashi Kaikyo Bridge even more amazing is the fact that it weathered a 7.2-magnitude earthquake during construction. The temblor struck on Jan. 17, 1995, creating a new fault near the bridge. This shifted the bridge's foundations and expanded the central span of the bridge by 2.6 feet (80 centimeters) and one side span by almost a foot (30 centimeters). Luckily, the earthquake didn't damage the towers. Engineers increased the length of the cables, redesigned the girders to accommodate the increased length of the bridge and proceeded with no further mishaps.

Back in North America, another long bridge tested the skill and ingenuity of engineers.