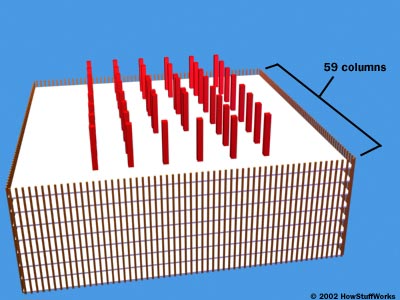 The World Trade Center towers had an innovative "tube" design, with a perimeter support structure joined to a central core structure with horizontal floor trusses.

The final design for the WTC was a group effort, bringing together the work of dozens of architects, structural engineers and managers, led by a few prominent talents. The Port Authority's Guy Tozzoli selected the final team and managed the entire design and construction process; the chief architect on the project, Minoru Yamasaki, came up with the twin towers concept, as well as the basic layout for the rest of the complex; structural engineers Leslie Robertson and John Skilling figured out how to make the towers stand up.

The final complex consisted of seven buildings, dominated by the twin 110-story towers rising more than 1,360 feet (415 meters) above an open plaza. The monumental tower design was innovative, ambitious and deceptively simple.

At the time of construction, most new skyscrapers were built around grid-style steel skeletons. In this design, the support structure is spread throughout the entire building. Metal beams are riveted end to end to form vertical columns, and at each floor level, these vertical columns are connected to horizontal girder beams. The support columns are all internal, so the outside of the building doesn't have to hold up anything but its own weight. These outer curtain walls can be made of just about anything, including ordinary glass.

The WTC team took a slightly different approach. They decided to build long "tubes," where all the support columns would be around the outside of the building and at the central core of the building. Essentially, each tower was a box within a box, joined by horizontal trusses at each floor.

The outer box, measuring 208 feet by 208 feet (63x63 m), was made up of 14-inch (36-cm) wide steel columns, 59 per building face, spaced just over 3 feet (1 m) apart. On every floor above the plaza level, the spaces between the columns housed 22-inch (56-cm) windows. Yamasaki, who had a pronounced fear of heights, felt that the small windows made the building feel more secure. The columns were covered with aluminum, giving the towers a distinctive silver color. The inner box at the core of each tower measured about 135 feet by 85 feet (41x26 m). Its 47 heavy steel columns surrounded a large open area housing elevators, stairwells and restrooms.

This design had two major advantages. First of all, it gave the building remarkable stability. In addition to shouldering some of the vertical load (the weight of the building), the outer steel columns supported all of the horizontal forces acting on the tower (the force of the wind). This meant the inner support structure was completely dedicated to the huge vertical loads.

Secondly, the tube design made for great real estate. With the support structure moved to the sides and center of the building, there was no need to space bulky columns throughout each floor. Clients could configure the available space, about 3/4 of an acre per floor, however they wanted.

The vertical support columns at the core of the building went all the way down below the bottom floor, through the basement structure, to the spread footing structure below ground. In the spread footing design, each support column rests directly on a cast-iron plate, which sits on top of a grillage. The grillage is basically a stack of horizontal steel beams, lined side by side in two or more layers (see diagram below). The grillage rests on a thick concrete pad poured on the solid bedrock deep underground. This pyramid shape distributes the concentrated weight from the columns over a wide, solid surface. With the steel in place, the entire structure was covered with concrete.