The Life of the World Trade Center 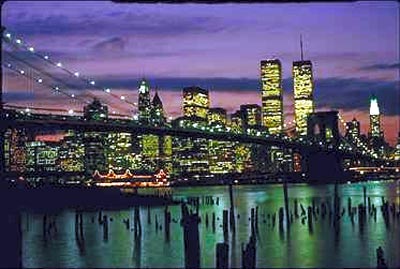 The World Trade Center complex officially opened its doors on April 4, 1973, to a highly skeptical New York. From its conception all the way through its completion, the WTC project was wildly unpopular with many New Yorkers. Business owners and residents were upset at being forced out of the construction site; citizens all over the city wondered why the Port Authority was sinking so much money into the project (estimated at more than $1 billion, the equivalent of about $4.5 billion today), apparently at the expense of public transportation facilities; environmentalists questioned some of the construction practices; and several prominent architectural critics said the towers were simply too big and ostentatious. The grand opening was certainly a celebratory day for the Port Authority, design team and construction crew, but the WTC complex had a long road in earning the city's acceptance.

Over the next decade, it did just that, and then went on to win over the rest of the country. Boosted by prominent appearances in several movies, such as the 1976 "King Kong" remake, Woody Allen's "Manhattan," and the "Superman" movies, the Twin Towers gained widespread recognition as a piece of New York.

The towers' fame was also fueled by several notable stunts. In the years after the WTC's completion, skydivers successfully parachuted from the top of the towers, climbers scaled the building and a French acrobat walked back and forth between the buildings on a tightrope. In only a few years, the distinctive image of the Twin Towers was a staple on New York postcards, T-shirts and advertisements. The buildings had evolved into a proud symbol of the city, securing their place as an American icon.

The towers also won New Yorkers over by giving them a new view of their city. Visitors could climb to the top of WTC 2, the South tower, for a breathtaking view of the skyline from the outdoor observation deck. On a clear day, it was possible to see more than 40 miles (64 km) in every direction. Visitors with a larger budget could enjoy the view from a more elegant setting, the "Windows of the World" restaurant at the top of WTC 1, the North tower. When the observation deck and restaurant opened, even staunch WTC critics showed up to check out the view.

Most New Yorkers (and most Americans) were familiar with the towers mainly from the outside, but the thousands of people who worked in the towers had a very different perspective -- they appreciated not only the monumental size of the buildings, but also the dizzying variety of activity going on inside. The WTC supported approximately 500 businesses with a collective 50,000 employees. This included offices for banks, law firms, brokerage houses, television stations, publishers, charitable organizations and airlines, among many other things. Additionally, the towers included nine chapels of various faiths.

On a typical business day, as many as 200,000 visitors from all over the world passed through the complex. With the huge range of activity going on, the towers were almost a city unto themselves.