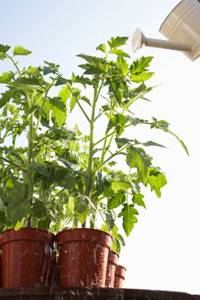 Water regulates the temperature of plants and transports nutrients through them.
Martin Poole/Digital Vision/Getty Images

Plants contain even more water than animals do -- most of them are anywhere from 90 to 95 percent water [source: BBC]. Just as it does in animals, water regulates the temperature of the plant and transports nutrients through it. But instead of taking in water by drinking and eating, plants get it through dew, irrigation and rainfall.

Plants take in water through their roots, and green ones use it in photosynthesis, which is how they create sugar for food. (You can learn more about the process of photosynthesis in How the Earth Works.) Plants also need water to support themselves. Pressure from the process of osmosis -- the movement of water from the outside to the inside of the plant's cells -- keeps up the plant's cell walls.

When you water a plant, it sucks up the water through capillary action. Then the water travels from the roots through tubes called xylem vessels. Water reaches the leaves of the plant and escapes through small holes called stomata, which open when the plant needs to cool down. This process is called transpiration and is similar to how people (and some animals) sweat. Carbon dioxide also enters the plant through the stomata.

Processing water is more complicated in animals and people, although it's also similar in a lot of ways. Water that you consume is absorbed in the upper small intestine through osmosis. It enters the bloodstream and is transported all over the body. Unlike plant cells, however, animal cells do not have cell walls. This is why animals have circulatory systems -- otherwise, our cells would absorb water and salt until they swelled. Our circulatory systems move water around our bodies and remove it as needed through sweating and urination.

A few animals, like a microscopic organism called the tartigrade, can go without water for an extraordinary period of time. If the tartigrade's environment doesn't have enough water, the animal goes into a life without water, called anhydrobiosis. Sugar takes the place of water in its cells, making it impervious to extremes in temperature. Its metabolism lowers, and the tartigrade stays at this barely alive state until it has enough water to really live again.

Next, we'll look at how the hydrologic, or water, cycle functions.