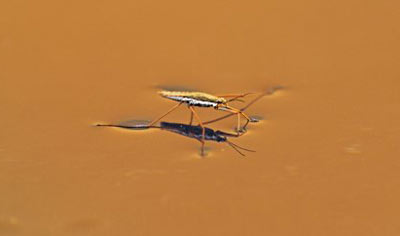 The hydrogen bond between water molecules that we talked about in the first section is the reason behind two of water's unique properties: cohesion and adhesion. Cohesion refers to the fact that water sticks to itself very easily. Adhesion means that water also sticks very well to other things, which is why it spreads out in a thin film on certain surfaces, like glass. When water comes into contact with these surfaces, the adhesive forces are stronger than the cohesive forces. Instead of sticking together in a ball, it spreads out.

Water also has a high level of surface tension. This means that the molecules on the surface of the water are not surrounded by similar molecules on all sides, so they're being pulled only by cohesion from other molecules deep inside. These molecules cohere to each other strongly but adhere to the other medium weakly. One example of this is the way that water beads up on waxy surfaces, such as leaves or waxed cars. Surface tension makes these water drops round so they cover the smallest possible surface area.

Capillary action is also a result of surface tension. As we mentioned, this happens in plants when they "suck up" water. The water adheres to the inside of the plant's tubes, but the surface tension attempts to flatten it out. This makes the water rise and cohere to itself again, a process that continues until enough water builds up to make gravity begin pulling it back down.

Water's hydrogen bonds are also why its solid form, ice, can float on its liquid form. Ice is less dense than water because water molecules form crystalline structures at freezing (32 degrees Fahrenheit or 0 degrees Celsius) temperatures. The thermal properties of water are also linked to its hydrogen bonds. Water has a very high specific heat capacity, which is the amount of heat per unit mass required to raise its temperature by one degree Celsius. The energy required to raise the temperature of water by one degree Celsius is 4.2 joules per gram. Water also has a high heat of vaporization, which means that it can take a lot of heat without its temperature rising much. This plays a huge part in the climate, because it means that oceans take a long time to warm up.

Water is often known as the universal solvent, which means that many substances dissolve in it. Substances that dissolve in water are hydrophilic. This means that they are as strong or stronger than water's cohesive forces. Salt and sugar are both polar, like water, so they dissolve very well in it. Substances that do not dissolve in water are hydrophobic. This is the source of the saying "oil and water don't mix." Water's solvency is why the water that we use is rarely pure; it usually has several minerals dissolved in it.

The presence of these minerals is the difference between hard water and soft water. Hard water usually contains a lot of calcium and magnesium, but may also contain metals. Soap will not lather well in hard water, but hard water isn't usually dangerous. It can also cause lime scale deposits in pipes, water heaters and toilets.

Some of the latest controversy about water's properties lies in how ice behaves when it melts. Some scientists claim that it looks about the same as it does when it's solid, except that some of its hydrogen bonds are broken. Others claim that it forms an entirely new structure. So for all of its importance, we still don't completely understand water.

For lots more information about water and related topics, check out the links below.