by Jennifer Pocock
NEXT PAGE 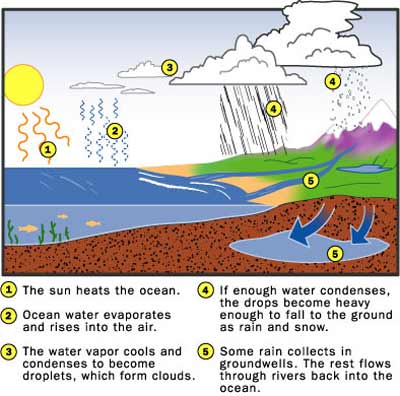 The hydrologic cycle keeps the Earth's fresh water supply on the move.
HowStuffWorks

Water -- We drink it, we bathe in it, and we play in it. Water gives us life, yet too much or too little can also take life away. It's the most common substance on Earth, but far too often there's not a drop to drink. Water's extraordinary attributes give life to this planet, which might otherwise be barren and lifeless. For example, water actually expands when it freezes, becoming less dense. If ice didn't float on water, our planet would be a very different place today. Ice would sink to the bottoms of lakes and rivers, where the sun would be unable to melt it in the spring, a necessary process for making clouds and rain, which continue the flow of the cycle. This would happen every year until, eventually, there was nothing left but ice and an uninhabitable wasteland.

Water exists in three states -- solid, liquid and gas -- which comprise the Earth's hydrologic cycle, better known as the water cycle. In this cycle, fresh water comes to Earth as rain, sleet, snow and hail, pouring down over oceans and land day and night. The water that hits land runs off into larger bodies of water, like lakes and rivers, or it seeps underground and becomes groundwater, nourishing our crops in the process. When the sun comes back out, it heats up the water and makes vapor, which rises up and condenses into clouds, which gather, become heavy with water and fall back to Earth as rain.

Thi­s cycle has gone on since the world began and has made life on Earth possible. In fact, there is no more and no less water in the world today than there was when the dinosaurs were around. Think of the Earth's water cycle as the ultimate recycling method. No wonder hydrologists are so fascinated by it.

Go to the next page to read about the different branches of science that hydrologists make use of to study the Earth's water cycle.

While about 70 percent of the Earth's surface is covered with water, 97 percent of the water is salty ocean water, which is unfit for human consum­ption. Of the 3 percent that's fresh water, 2 percent is frozen into glaciers, leaving only 1 percent of the entire world's water supply fit to drink. Think of that the next time you take a really long shower.