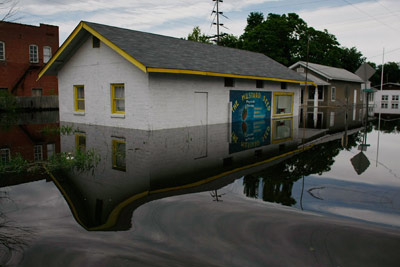 A business is surrounded by flood water from the Mississippi River in Foley, Mo.
Joe Raedle/Getty Images

Anyone who has ever experienced a flood or known someone who has understands that floods are serious business. They can take out entire communities and level hundreds of years of history in just seconds.

Some floods can arrive suddenly -- these are called flash floods or critical floods. Sometimes it doesn't even have to be raining anywhere nearby for a flash flood to occur. Flash floods can happen when a heavy rain occurs upstream and the water flows downstream, gathering more momentum as it passes. Another type of critical flooding happens when some sort of flood-retention device, like a dam or levee, breaks and water rushes out.

Non-critical floods are floods that happen slowly, over a relatively long period of time. These occur when heavy rains fall for days on end, and rivers, lakes and streams swell past their normal boundaries. Don't let the name fool you -- non-critical floods can be just as devastating as flash floods if they're not prepared for, and they can lead to critical flooding as well.

Hydrologists work constantly to prevent and lessen the severity of floods. Hydroclimatologists use rainfall data and meteorological technology to help determine the maximum rainfall for an area. They then try to determine when floods might occur and how much rain it would take to flood an area.

With this information, hydrologists work with organizations, like the United States Federal Emergency Management Agency (FEMA), to help plan city development and emergency response. This is based on the idea that a major flood happens once every one hundred years. A hydrologist's goal is to figure out what the worst flooding possibilities are for a span of one hundred years and design around that possibility to minimize the harm and the cost of rebuilding. Sometimes, if the cost to build a flood device to one-hundred-year flood strength is much more than the cost of rebuilding, engineers will build for the possibility of a 25- or 30-year flood -- the worst possible flood that might happen every 25 to 30 years. This usually happens in remote areas, like parks or forests, where there are not a lot of people who might

The work of the hydrologists determines where and how to build not just flood devices like levees, dams and culverts, but also where to put entire cities and neighborhoods. Safety is what's most important. Successful flood control is not always apparent, but unsuccessful attempts are far too obvious.

Some hydrologists go to the ends of the Earth to study the water system -- some go even farther. Find out how far some are willing to go on the next page.