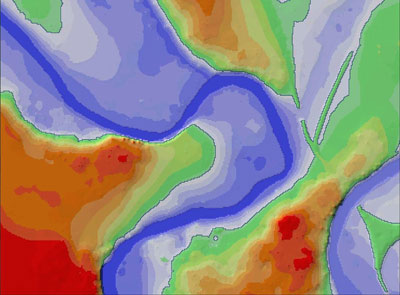 Water is everywhere, but it's not always reachable. Hydrologists use models, maps and figures to help them distinguish where the water is -- underground aquifers and remote glaciers are no match for a well-informed hydrologist.

Spatial hydrologists use GIS (global interface systems) and GPS (global positioning systems) to help them map streamflow, pollution and various environmental problems. These can look like anything from a line graph to a full-scale 3-dimensional model of a river or underground water system. These high-tech systems make use of coordinates, measurements and data to generate detailed pictures of the area.

Hydrologists will go pretty far to get information on the movement of water. Remote sensing satellites orbit the Earth, taking pictures of the oceans and what's happening in them. The satellites produce topographical maps of the ocean, which help hydrologists study the oceans and their movements as a whole. There's even a coral-reef remote sensing tool. Reefs are a great ecological resource, helping to produce oxygen and keep an environmental balance for the entire planet. Knowing where these reefs are and how to study them is very important.

This image from a NASA satellite shows the coastline of the Bahamas, Florida and Cuba. The banks are shallow coral reefs that reflect light through the ocean, giving it a bright blue color.
Stocktrek Images/Getty Images

Parametric hydrology is a more theoretical branch of hydrology. It uses computer modeling to come up with relationships between events in the hydrological cycle. It then uses these relationships to generate possible new events.

Overall, hydrologists are a large and diverse group. They are dedicated to the preservation of the Earth's water by any means necessary. Hydrologists help maintain the livelihood of mankind by helping to regulate floods, pollution and sewage. Not only that, they get to make some really fascinating models. Hydrology is a branch of science that will always be in demand, especially as our population continues to grow and the demand for fresh water increases.

To learn more about the water that's all around us, follow the links below. They'll provide you with more information.

Scientists have recently found remnants of water in volcanic glass collected from the moon, causing them to question how the moon came to be. An old idea was that a rogue planet, about the size of Mars, smashed into the Earth, causing large pieces of our planet to break off. These pieces came together and formed the moon, though any light atoms, such as hydrogen, were not able to survive. Finding water in the rocks could call in to question the age and origin of the moon [source: National Geographic].