How much energy in a hurricane, a volcano, and an earthquake? 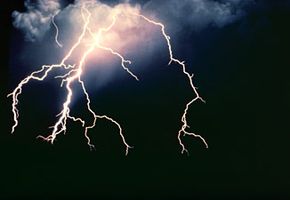 Energy has been on everybody's minds lately, probably because our society is in a transition period, trying to move from polluting sources to cleaner ones. I thought it would be interesting to have a look at some of the ways Mother Nature is using energy. Natural phenomena like hurricanes, volcanos, and earthquakes are impressive displays of power, showing us that our industrial civilization isn't even the biggest player when it comes Big Energy.

On the next page, discover how much energy a hurricane generates.

How much energy in a hurricane?

Let's start with hurricanes, with their low-pressure "eye" and multitudes of thunderstorms spinning around it. You probably know that these large tropical cyclones are releasing a lot of energy. But how much is a lot, really?

Well, that depends on how you measure it, but any way you slice it, hurricanes release a phenomenal amount of energy. If we start by looking at just the energy generated by the winds, we find that for a typical mature hurricane, we get numbers in the range of 1.5 x 10^12 Watts or 1.3 x 10^17 Joules/day (this is according to the Atlantic Oceanographic and Meteorological Laboratory.)

This is equivalent to about half of the total electrical generating capacity on the planet! For a single hurricane!

But that's not all, we're just getting started. A hurricane also releases energy through the formation of clouds and rain (it takes energy to evaporate all that water). If we crunch the numbers for an average hurricane (1.5 cm/day of rain, circle radius of 665 km), we get a gigantic amount of energy: 6.0 x 10^14 Watts or 5.2 x 10^19 Joules/day!

This is equivalent to about 200 times the total electrical generating capacity on the planet! NASA says that "during its life cycle a hurricane can expend as much energy as 10,000 nuclear bombs!" And we're just talking about average hurricanes here, not Katrina.

How much energy in a volcanic eruption?

]Volcanoes also release mind-boggling quantities of energy, though usually not quite on the scale of hurricanes (thankfully for those who live near!). But if we look at a well-known major volcanic eruption, the eruption of Mount St. Helens in 1980, we find that: "In all, Mount St. Helens released 24 megatons of thermal energy, 7 of which was a direct result of the blast. This is equivalent to 1,600 times the size of the atomic bomb dropped on Hiroshima" (U.S. Geological Survey).

But Mount St. Helens wasn't even at the top of the scale of Volcanic Explosivity Index. It was a class 5, and the scale goes up all the way to 8, which are called "mega-colossal" eruptions. These class 8 super-volcanos erupt extremely rarely (otherwise we wouldn't be here), but when they do, more than 1,000 cubic kilometers of rock and ash are ejected, the climate of the whole planet is affected for extended periods of time, and mass-extinctions can be expected. Now that is powerful! To get anywhere close to that kind of energy release, the U.S. and Russia would have to use their entire nuclear arsenals simultaneously, and even that might not be enough to compare depending on how long the volcanic eruption lasts.

How much energy in an earthquake?

Last, but not least, are earthquakes. The surface of the Earth is constantly affected by tectonic forces, and in certain places, the pressure accumulates enough to make the crust bend slightly. But because rock is very rigid, this stress eventually makes it snap back into a new position, releasing massive amounts of energy. These sudden movements, called seismic waves, vary widely in severity. From wobbling the water in your glass to the complete destruction of whole cities, depending on their intensity.

On Earth, it is estimated that there's an earthquake every 30 seconds. But the vast majority of those are too weak to be perceptible without very sensitive equipment. Large earthquakes, 6 and up on the Richter scale, happen over 100 times a year, though not always in densely inhabited regions.

"How much energy in a hurricane, a volcano, and an earthquake?" 29 August 2012.
HowStuffWorks.com. <https://science.howstuffworks.com/environmental/energy/energy-hurricane-volcano-earthquake.htm> 30 July 2021
Print | Citation 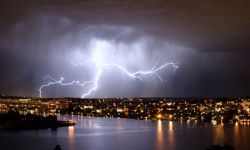 Up Next
The Science of Storms
Explore More 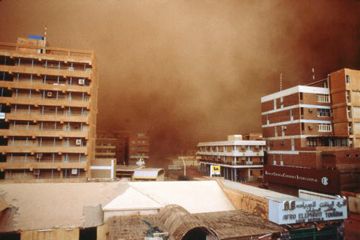 You May Like
How Dust Storms Work
Explore More