In the future, will wind turbines be everywhere?

by Brian Merchant
Next 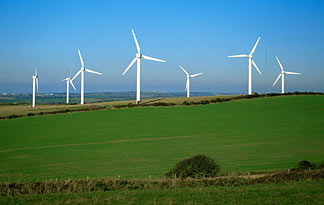 How much do you know about wind turbines?
DCI

Wind power continues to be one of the most promising renewable energy sources. Over the last decade, the wind industry has seen exponential growth, and wind farms are popping up all over the world. It's currently the renewable energy source that can best compete with fossil fuel power plants—in some regions around the world, the clean, safe energy it generates is already just as cheap as coal.

All of which seems to indicate that we'll be seeing a lot more wind turbines in the future, in many more regions across the globe. Even if the trend continues at the pace that's been set today—and doesn't greatly accelerate as some analysts predict it will—wind turbines will proliferate in the coming years.

But this doesn't mean there will be wind turbines everywhere you turn your head. Opponents of wind energy like to claim that the turbines themselves are eyesores that can disrupt a sense of natural beauty (though proponents, equally as numerous, argue the futuristic aesthetic is appealing). So, some have exhibited an irrational fear that the turning blades will be everywhere you turn your head in a few short years, crowding out idyllic mountain landscapes and bucolic farmlands.

Fear not. On the contrary, we're likely to see most of the wind sector's expansion in a number of targeted areas—especially offshore. The technology for offshore wind power is rapidly increasing, and the potential for power generation on the open seas is much greater than on land, where wind is slowed by uneven geography. So it's more likely that you'll be spotting tons more wind turbines from your airplane window as you make a transatlantic flight than anything.

Unless, of course, you live in a naturally windy area, like, for instance, the Great Plains that span much of the United States and Canada. The Great Plains have been called the 'Saudi Arabia' of wind power, since the potential there is so vast. In states like Iowa, Texas, and Nebraska, wind turbines are already being built at a rapid clip. Iowa recently became the first U.S. state to get 20 percent of its electricity from wind power, and it's only continuing to develop.

But far from retreating from such developments for fear that they might yield unsightliness, most locals are heartily embracing the wind power boom. Wind farms can bring economic prosperity, especially to rust belt or old oil towns that are otherwise being hard hit by the recession. Indeed, in states like Texas and Iowa, wind power is a truly nonpartisan pursuit.

Which is why it stands to reason that, in such regions with truly vast potential for clean power generation, wind farms are almost certain to take root. After all, it's a boon for local economies as much as it is for the environment.

Smaller, portable wind turbines are also looming on the horizon—while still largely prototypical and relegated to niche markets, these turbines may be available on the mass market sooner rather than later. In other words, you may very well see your neighbor floating a turbine in his backyard; using it to go off the grid, powering his home with renewable energy. Turbines are also being built into big buildings, increasing the chances you'll see integrated turbines in skyscrapers in urban environments.

All told, the future will indeed be one filled with wind turbines of every stripe— behemoth commercial turbines that are growing ever larger and more efficient, to tiny, personalized floating power plants that can run a small home — but the changes to the general landscape will be slow and subtle. In the future, wind turbines should be everywhere. But they'll likely be built subtly and tastefully in various environments around the world—and you'll probably hardly even notice. 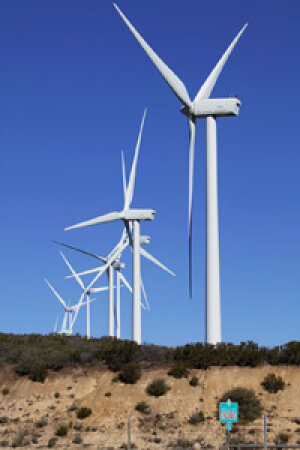