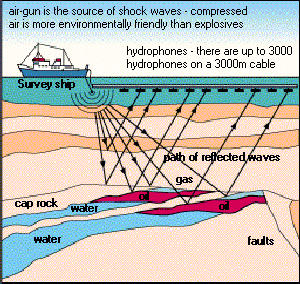 Whether employed directly by an oil company or under contract from a private firm, geologists are the ones responsible for finding oil. Their task is to find the right conditions for an oil trap -- the right source rock, reservoir rock and entrapment. Many years ago, geologists interpreted surface features, surface rock and soil types, and perhaps some small core samples obtained by shallow drilling. Modern oil geologists also examine surface rocks and terrain, with the additional help of satellite images. However, they also use a variety of other methods to find oil. They can use sensitive gravity meters to measure tiny changes in the Earth's gravitational field that could indicate flowing oil, as well as sensitive magnetometers to measure tiny changes in the Earth's magnetic field caused by flowing oil. They can detect the smell of hydrocarbons using sensitive electronic noses called sniffers. Finally, and most commonly, they use seismology, creating shock waves that pass through hidden rock layers and interpreting the waves that are reflected back to the surface.

In seismic surveys, a shock wave is created by the following:

The shock waves travel beneath the surface of the Earth and are reflected back by the various rock layers. The reflections travel at different speeds depending upon the type or density of rock layers through which they must pass. Sensitive microphones or vibration detectors detect the reflections of the shock waves -- hydrophones over water, seismometers over land. Seismologists interpret the readings for signs of oil and gas traps.

Once geologists find a prospective oil strike, they mark the location using GPS coordinates on land or by marker buoys on water.