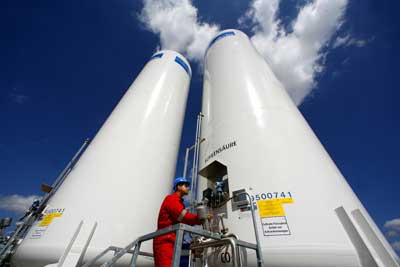 After we collect and transport all that carbon dioxide (CO2), we're going to need somewhere to put it. But where? In some sort of giant storage unit? A huge tank out in the desert? Will we need more landfills to hold our CO2 waste?

Don't worry, the answer to all those questions is "no." There are two places we've found to store CO2 -- underground and underwater. In fact, estimates project that the planet can store up to 10 trillion tons of carbon dioxide. This would allow 100 years of storage of all human-created emissions [source: Science Daily]. (Though we'll obviously survive much longer than that.)

First, we'll talk about underground storage. The pressure found deep underground causes CO2 to behave more like a liquid than a gas. Because it can seep into the spaces in porous rocks, a great amount of CO2 can be stored in a relatively small area. Underground storage, also called geological sequestration, is already in use by the oil and gas industries to squeeze out extra oil or gas from depleted reservoirs. Oil and gas reservoirs are well suited to store CO2 as they consist of layers of porous rock formations that have trapped oil and gas for years. Geological sequestration involves injecting CO2 into underground rock formations below the Earth's surface. These natural reservoirs have overlying rocks that form a seal, keeping the gas contained. There can be risks to underground storage, though, and we'll discuss those a bit later.

Basalt formations (volcanic rock) also appear to be suitable for storing CO2. In fact, basalt is one of the most common types of rock in the Earth's crust -- even the ocean floor is made of basalt [source: USGS]. Researchers have found that when they inject CO2 into basalt, it eventually turns into limestone -- essentially converting to rock. The Pacific Northwest National Laboratory in Washington State currently has a team devoted to running a pilot project to test basalt carbon storage [source: MSNBC].

Another project, called CO2 Sink, is testing geological sequestration in a location near Berlin, Germany. The project, started in 2004, aims to create a standard for CO2 injection. After injecting CO2 into a sandstone reservoir, scientists will actively study the area for long-term integrity and safety, leakage concerns, and movement of the CO2 within the reservoir [source: CO2Sink]. Also, the Sleipner gas field offshore in Norway has been injecting carbon dioxide into the sea floor since 1996 [source: Solomon].

In addition to underground storage, we're also looking at the ocean for permanent CO2 storage. Some experts claim that we can safely dump CO2 directly into the ocean -- provided we release it at depths greater than 11,482 feet (3500 meters). At these depths, they think the CO2 will compress to a slushy material that will fall to the ocean's floor. Ocean carbon storage is largely untested, and there are many concerns about the safety of marine life and the possibility that the carbon dioxide would eventually make its way back into the environment. For more information on this topic, read Can we bury our CO2 problem in the ocean?.

Next, we'll look at some of these concerns in more detail and find out if carbon ca­pture and storage is a viable solution for our future.

Is there anything baking soda can't do?

One more option for storing excess carbon dioxide is, strangely enough, baking soda. A company called SkyMine is already doing it. Once they sequester the CO2 from other gases and by-products, SkyMine injects it with salt and water (sodium hydroxide). This chemical reaction forms baking soda -- a compound handy for everything from baking a delicious cake to brushing your teeth. To find out more about baking soda and the SkyMine project, check out our article Can Baking Soda Save the Environment?.