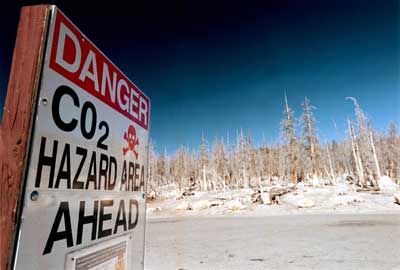 A danger sign warns visitors of high levels of carbon dioxide near Horseshoe Lake in California. The lethal gas is produced by molten magma, which rises to the earth's surface.
David McNew/Getty Images

Although carbon capture and storage may seem like a miracle solution, it's not without concern or controversy. To begin, it's important to remember that carbon capture and storage (CCS) is not a license to continue emitting CO2 into the atmosphere. We need to use CCS in addition to other emission-reduction efforts. However, CCS provides a way to clean up our existing power plants.

Opponents of CCS believe that, while it may be viable, the focus is all wrong. They argue that we should be coming up with ways to wean ourselves off fossil fuels instead of spending time and money on ways to continue using fossil fuels. According to the environmental group Greenpeace, widespread deployment of CCS isn't even possible until at least 2030.

Another drawback? Current CCS technologies actually require a lot of energy to implement and run -- up to 40 percent of a power station's capacity [source: Greenpeace]. Additionally, if we transport that captured CO2 by truck or ship, those vehicles will require fuel. And, the burning of fossil fuels is what got us into this predicament in the first place.

Creating a CCS-enabled power plant also requires a lot of money. For example, the United States has its own CCS project in the works. FutureGen hopes to build the first coal-fueled zero-emissions power plant. Its goal is to create a power plant that runs on coal but stores carbon emissions underground. The plant would power 150,000 homes and generate 275 megawatts of electricity [source: FutureGen]. Private partnerships and federal monies helped support the project. But President Bush pulled support when projected costs topped $1.8 billion. The government had already sunk $50 million into the project when it pulled its backing [source: Wald]. FutureGen continues to seek private and federal funding today.

The biggest concern with CCS, though, is the environmental risk. What happens if the carbon dioxide leaks out underground? We can't really answer this question. Because the process is so new, we don't know its long-term effects. Proponents, however, point to the Sleipner gas field, which has been in operation for more than 10 years without any detectable underground leakage.

What if the carbon dioxide leaks out in the ocean? We do have a little bit of knowledge on this one. In 1986, a natural volcanic eruption of carbon dioxide from a lake in Cameroon killed nearly 2,000 people. They died of asphyxiation from being in close vicinity to the release of CO2. These numbers don't even take into account the death toll of marine life that called the lake home [source: BBC].

Another effect of excess CO2 in the water is increased acidity. The ocean actually absorbs CO2 from the atmosphere -- a phenomenon known as carbon sink. Scientists have recently discovered that some oceans aren't absorbing as much CO2 as they did in the past. The Southern Ocean, in particular, no longer soaks up as much carbon dioxide, a fact that alarms scientists. The excess CO2 from human emissions appears to be staying on the surface of the oceans instead of sinking. And the more CO2 an ocean surface absorbs, the more acidic it becomes [source: Rincon]. Higher water acidity adversely affects marine life. For example, it reduces the amount of vital calcium carbonate marine creatures need to build their shells.

There are still many questions about whether carbon capture and storage will help to alleviate the greenhouse effect and slow climate change. But one thing's for certain: carbon dioxide emissions are a worldwide problem.

For more information about carbon, dig your way into the links below.

Another promising breakthrough in CCS involves trapping CO2 straight from the air, rather than from a power plant source. This means we could capture CO2 closer to a storage area, rather than having to capture it and then transport it -- possibly hundreds of miles -- to storage.

The creator of this technology, Klaus Lackner, found inspiration in his daughter's science fair project. She wanted to see if she could scrub carbon dioxide from the air and, by using an aquarium pump and a solution of calcium hydroxide and sodium hydroxide, she succeeded. Lackner decided to try the experiment on a large scale. Last year he unveiled a working prototype. H­e hopes to have a commercial version ready within the next four years. He envisions his carbon dioxide scrubbers as big synthetic trees, dotting the landscape like windmills [source: Meisel].