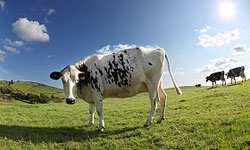 Cows may look pretty benign as they languidly chew on grass in farm fields, but some environmentalists warn that the animals' farting, belching and pooping is a major contributor to climate change. A 2006 United Nations report estimated that cows, along with other livestock like sheep and goats, contribute about 18 percent of the greenhouse gases that are warming the planet -- more than cars, planes and all other forms of transportation put together [source: Lean]. That's largely true because bovine emissions are rich in methane, a gas that's 21 times more efficient than carbon dioxide at trapping heat in the atmosphere [source: Los Angeles Times].

But cow fanciers should fear not, because scientists are busy finding ways to turn this smelly problem into a solution. They've already developed a method for extracting methane from cow excrement and converting it to a biogas fuel that's of sufficient quality to be fed into a standard natural gas pipeline. In Kern County, Calif., a company called BioEnergy Solutions uses that method to produce 650,000 cubic feet (18,406 cubic meters) of biogas from manure, enough to power 200,000 households [source: Levinson].

Harnessing cow farts as a fuel source might be tricky, but it isn't inconceivable, either. In Argentina -- a major beef producing nation where the collective herd of 55 million cattle outnumbers the human population -- researchers have developed a special bovine backpack that captures a cow's emissions via a tube attached to the cow's stomach, and discovered that the animals produce between 800 and 1,000 liters of gas each day [source: Zyga].