Floating Wind Farms in the Middle of the Ocean 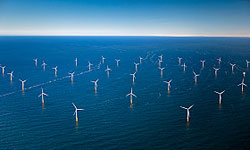 There's been plenty of talk of developing offshore wind farms to supply electricity, but as the chronically-delayed effort to build the CapeWind project in Nantucket Sound demonstrates, it's not that easy to convince people in coastal areas that wind turbines won't mar the natural beauty of their surroundings or damage delicate marine ecosystems [source: Lindsay]. That's why the ultimate solution may be to put wind farms hundreds of miles from coastlines, conveniently out of view, and to have them float on the surface of the water, tethered rather than attached to a structure to the ocean floor.

In addition to being less obtrusive, floating wind turbines have a much greater potential to generate power. They can capture the energy of winds in the open ocean, which can reach speeds at least twice as fast as winds near land [source: Economist]. Some reports suggest that wind farms could provide up to 15 percent of the world's future energy needs [source: Jacquot].

In late 2011, the first such offshore floating wind farm, a $30 million prototype called WindFloat, was put in place 217 miles (349 kilometers) off the coast of Portugal [source: Scientific American]. It uses a 2-megawatt turbine manufactured by a Danish company, Vestas, which is bolted onto a triangular floating platform made by Seattle-based Principle Power. The platform is moored with four lines, two of which are connected to the column stabilizing the turbine, which helps to reduce excess motion. As the wind shifts direction and places loads on the turbine and foundation, pumps will shift ballast water between chambers in the platform, enabling the installation to cope with more powerful offshore weather. As Antonio Vidigal, CEO of EDP Inovacao, one of the partners in the project, told Scientific American: "The deep ocean is the next big energy frontier" [source: Scientific American].