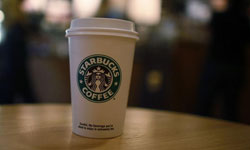 That morning cup of Joe that helps fuel us for the day ahead could soon also help propel trucks as well. In 2009, University of Nevada-Reno engineering professor Mano Misra, known around the lab for his coffee consumption, noticed the sheen of oil floating on top of a cup of brew that had cooled. A light bulb went off in Misra's caffeinated brain, and he asked a couple of students to work on a project to investigate whether coffee oil could be a feedstock for biodiesel.

The students determined that, depending on the particular bean used in the brew, coffee grounds can contain as much as 20 percent oil, and that it has an unusually high oxidative stability (which means it won't break down when exposed to oxygen and therefore gunk up fuel lines). They subsequently developed a method to remove the sulfur found in coffee biodiesel, which comes from the volcanic soils in the mountainous regions where coffee generally is grown. The resulting fuel was sufficient to meet the standards set by ASTM International, an international testing organization, for biodiesel.

The researchers estimate that if all the waste grounds generated by the world's coffee drinkers were gathered and reprocessed, the yield would amount to 2.9 million gallons of diesel fuel each year. Alternatively, the coffee grounds could be converted to fuel pellets. If all of the leftover grounds from Starbucks were reprocessed, they would produce 89,000 tons of such fuel pellets annually, enough to generate millions of dollars in revenue for the coffee-shop chain, as well as help counter rising fuel costs for trucking companies [source: Schill].