Paper Versus Plastic: Environmental Disadvantages of Each 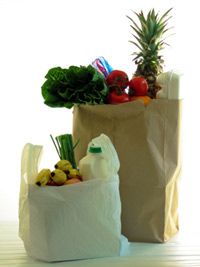 For the battle over which is greener, neither paper nor plastic have it in the bag.
iStockPhoto/Sean McBride

When you do get to choose between paper and plastic, don't let green guilt necessarily pull you toward paper. Consider that both materials have drawbacks for the environment.

­Before you brown bag it, consider these environmental disadvantages of paper:

However, plastic didn't get a bad reputation for nothing. Here are some environmental disadvantages of plastic:

These factors have made the question of which is greener mind-boggling. The EPA has admitted that not only is the question unresolved, but it doesn't consider the use of plastic bags a major issue [source: Spivey]. Most environmental groups say that it's best to avoid the choice altogether -- instead we should diligently reuse bags.

Papa's Got a Brand New Bag

New developments in biodegradable plastic bags are making them stronger, and cities like San Francisco are hoping they will replace traditional plastic bags. However, reports show that even these new-and-improved versions have their downsides -- they generate more greenhouse gas emissions than disposable plastic bags [source: Lilienfield].