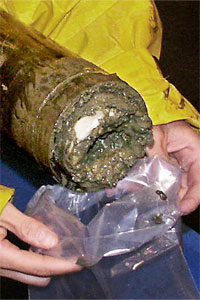 All by itself, methane isn't very exciting. It's a colorless, odorless gas and the simplest member of the alkane series of hydrocarbons. Its biggest claim to fame is that, as the main constituent of natural gas, it's useful as a source of energy.

Recently, however, geologists have discovered a type of methane that has piqued their curiosity. Part of its unusual character is how it exists in its natural state -- trapped inside a cage of ice. Even more intriguing is how much of this frozen methane seems to be locked away in the Earth's crust. Some estimates indicate that as much as 700 quadrillion (700 × 1015) cubic feet (20 quadrillion cubic meters) of methane are encased in ice and trapped in seafloor sediments all over the world [source: Tarbuck]. That's twice as much carbon as Earth's other fossil fuels combined.

The discovery of this new type of methane, what scientists call methane hydrate, has led to two important questions. The first is pragmatic: Will it burn like ordinary methane? It turns out it will. If you take a piece of methane hydrate -- it looks like hard-packed snow -- and touch a lighted match to it, the sample will burn with a reddish flame. And if that's the case, it could be used to heat homes, fuel cars and generally power energy-hungry nations such as Japan, the United States, India and China. Recent data suggest that just 1 percent of Earth's methane hydrate deposits could yield enough natural gas to meet America's energy needs for 170,000 years [source: Stone].

The second question is partly an ethical consideration: Should we, as a global community trying fervently to develop clean, renewable energy, embrace one of the fossil fuels that got us into trouble in the first place? Science can't answer that question. It can, however, reveal the challenges and risks that face countries hoping to take advantage of methane hydrate. One of the most significant challenges is finding efficient ways to extract the frozen fuel. More troubling are potential catastrophes -- ranging from massive underwater landslides to a runaway greenhouse effect -- related to methane mining.

In this article, we'll explore all the positives and negatives of methane hydrate. We'll look at its relatively brief history, as well as how it fits in some possible future scenarios. And, of course, we'll examine the basic science behind this so-called "flammable ice."

Let's start with some chemistry.