Fire and Ice: The Chemistry of Methane Hydrate 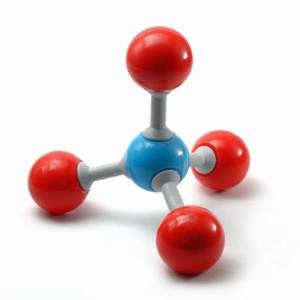 Representation of a methane molecule, with the blue sphere signifying carbon and the four red spheres signifying hydrogen
© iStockphoto.com/JC559

Frozen fuel is the catchy name for a family of substances known as gas hydrates. The gas in question is natural gas, a mixture of hydrocarbons, such as methane, propane, butane and pentane. Of these, methane is by far the most common component and one of the most-studied compounds in chemistry.

Like all hydrocarbons, methane contains only two elements -- carbon and hydrogen. It is an example of a saturated hydrocarbon, or a molecule composed entirely of single bonds and therefore the maximum number of hydrogen atoms allowed. The general formula for saturated hydrocarbons is CnH2n+2. Methane only has one carbon atom, so its chemical formula is CH4. Chemists describe this shape as a tetrahedron.

Methane is a colorless, odorless, combustible gas produced by bacterial decomposition of plant and animal matter. It forms in a process shared by all fossil fuels. First, marine plants and animals die and fall to the seafloor. Next, mud and other seafloor sediments cover the decomposing organisms. The sediments put a great deal of pressure on the organic matter and begin to compress it. This compression, combined with high temperatures, breaks down the carbon bonds in the organic matter, transforming it into oil and natural gas.

Generally, this methane -- what geologists describe as "conventional" methane -- is located beneath the Earth's surface. To get to it, workers must drill through rock and sediment and tap into the methane deposits to release the gas. Then they pump it to the surface, where it's transported through pipes across the country.

Methane can also form unconventionally if the sediments producing it are located about 1,640 feet (500 meters) below the ocean surface. The near-freezing temperatures and high pressure of these conditions causes the methane to become encased in ice. The methane doesn't bond chemically with the water. Instead, each tetrahedral methane molecule sits inside a crystalline shell made of ice. This unique substance is known as methane hydrate, and as soon as it reaches warmer temperatures and lower pressures, the ice melts away, leaving behind pure methane.

Geologists discovered naturally occurring methane hydrate only recently, but chemists have known about it for years, as we'll see in the next section.

Methane hydrate is a clathrate, a chemical substance made of one compound nested inside another. The word comes from the Latin clatratus, meaning "bars" or "lattice." One compound serves as a host, the other as a guest. In the case of methane hydrate, water is the host and methane is the guest. For this reason, chemists sometimes refer to clathrates as host-guest complexes.