A Brief History of Methane Hydrate 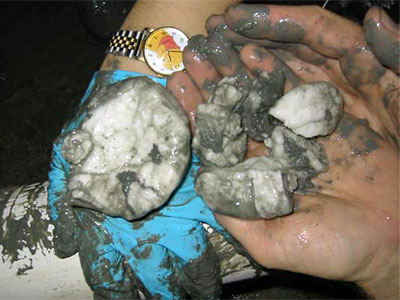 The history of gas hydrates can be traced back to Humphrey Davy, a chemist from Cornwall, England, who identified chlorine as an element in 1810.

Davy and his assistant, Michael Faraday, continued to work with chlorine throughout the early 1800s, mixing the green gas with water and cooling the mixture to low temperatures.

It's very likely that Davy observed the strange solid that resulted as chlorine atoms became encased in ice crystals, but Faraday gets official credit for the discovery. In 1823, Faraday issued a report describing the strange substance and called it chlorine clathrate hydrate. Other types of clathrates, each involving a guest compound locked inside the lattice structure of a host, were soon discovered, but they remained a laboratory curiosity.

Then, in the 1930s, natural-gas miners began to complain of an icelike material clogging pipelines exposed to cold temperatures. Scientists determined that this material was not pure ice, but ice wrapped around methane. They wasted no time trying to find ways to prevent hydrates from forming and turned primarily to chemicals, such as methanol or monoethylene glycol. Since then, mining companies have added these materials to their natural-gas pipelines to inhibit hydrate formation.

In the 1960s, scientists discovered that methane hydrate, or "solid natural gas," existed in the Messoyakha gas field in western Siberia. This was significant because naturally occurring gas hydrates had never been found before. Geologists and chemists arrived in the vast basin and began to study the conditions in which the hydrates were forming. They found that sub-permafrost sediments were rich in hydrates and began to look for similar deposits in other high-latitude regions. Soon, another team of researchers found methane hydrate in sediments buried deep below the North Slope of Alaska.

Based on these early findings, the U.S. Geological Survey (USGS) and the Department of Energy National Energy Technology Laboratory conducted extensive research between 1982 and 1992, revealing that methane hydrate deposits could be found in offshore sediments as well. Suddenly, what had once been a curiosity and an industrial nuisance looked like it might be a significant resource. In the mid-1990s, Japan and India took the lead in methane hydrate research, with the goal of finding more deposits and developing ways to extract the trapped methane economically. Scientists have since discovered methane hydrate deposits in numerous locations, including the Mackenzie River delta in Canada and the Nankai Trough off the coast of Japan.

Up next, we'll consider the impact methane hydrate could have on the world's energy supply.