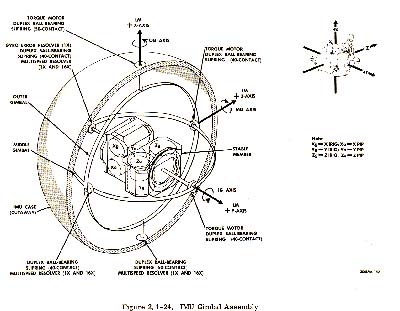 A schematic of the Inertial Measurement Unit, which uses a gimbal system to measure a spacecraft's velocity and attitude. (Click here for a larger image.)
Courtesy NASA

If you've read articles like How the Apollo Spacecraft Worked, you've seen the term gimbal. If you haven't read it, a gimbal is a platform that can pivot. What does that mean? Well, it means that instead of being fixed to an unmoving base, an object on a gimbal can rotate along at least one axis. In the world of aeronautics, these axes are roll, pitch and yaw.

It's easiest to understand roll, pitch and yaw by visualizing an object like an airplane. Think of an imaginary line that runs through the front of the plane and out the back. A rotation along this line would result in a roll -- the plane would start doing barrel rolls.

Now imagine another line running through both wings of the plane. A rotation along this line is a change in pitch. The plane either climbs or dives, depending on the direction of the pitch. A full circle would be a loop-the-loop.

Finally, imagine a vertical line that comes out of the top and bottom of the plane. This is the yaw axis. Rotating along this line results in a change in direction for the plane -- either right or left.

An object mounted on three or more gimbals can turn in nearly any direction. This can come in handy when you need to make sure an object's orientation in relation to a particular direction remains stable. How? Let's look at an example.

Imagine a billiards table aboard a cruise ship. If it were a normal table, the billiard balls would roll back and forth across the table's surface as the ship's roll, pitch and yaw changed. But a pool table mounted on a gimbal system could adjust for changes in the ship's orientation, maintaining a level playing surface. From an observer aboard the ship, it would look like the table was tilting in unusual ways. If you were to stand on the table, it would look like the rest of the ship was tilting.

What does a gimbal system look like? Find out in the next section.

On the left, you can see how each gimbal allows rotation around a specific axis. On the right, you can see a set of gimbals in gimbal lock. The inner-most gimbal can't change in pitch unless someone puts the gimbals into another position.
HowStuffWorks

While a gimbal can be any support that can pivot around an axis, most gimbal systems look like a series of concentric rings. The outermost ring mounts to a larger surface, like a boat's instrument panel. The next largest ring connects to the outermost ring at two points that are perpendicular to the outer ring's surface mount. Then, the third largest ring mounts to the second largest one at two points perpendicular to the connection between the first and second ring, and so on. Sound confusing? Take a look at the following illustration.

Each ring can pivot around one axis. How is this useful? On its own, it's just interesting to look at. But by mounting an object to the center of the system, you can make sure the object can face any particular direction at any time.

Well, almost any direction at any time. One problem with gimbal systems is gimbal lock. Gimbal lock occurs when two axes in a three-gimbal system align. When that happens, the object's movement is limited. An entire range of motion becomes impossible. This is what you see on the right in the above illustration.

Gimbal lock is a serious problem. There are two ways to avoid gimbal lock. One is to adjust the gimbals, either by maneuvering the surface so that the gimbals swing another way or by physically resetting the gimbals themselves. If gimbal lock does occur, the gimbals must be reset to work again. Another solution is to add more gimbals to the system. Adding a fourth gimbal helps eliminate gimbal lock, but it also makes the system bulkier and more complicated. Since most gimbals are part of electronic systems, adding more complexity is not always the best choice.

Gimbals allow designers to create devices that are more flexible than a fixed, stationary device. It's also possible to orient a device so that it's facing a specific direction independently of how its surrounding environment moves or changes. Such an application has dozens of uses, ranging from a cup holder that adjusts so that you don't have to worry about spilling your coffee to an array of satellite antennae that can turn to face incoming signals.

So what does this have to do with NASA? Find out in the next section.

What sort of devices use gimbal systems? They show up in all sorts of applications, from the mundane to the exotic. Here's a small sample: 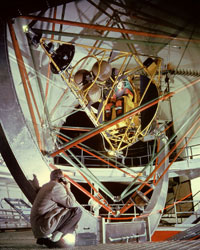