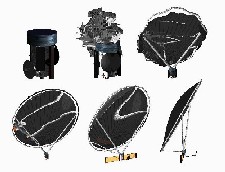 Inflatable space telescopes will be much lighter than their glass and metal predecessors, making them cheaper to put into orbit.  See more pictures of inflatable spacecraft.
Photo courtesy of NASA

As the space industry continues to cut costs by using lightweight materials and alternative types of energy, it is opening up the possibility that you and I may one day have the opportunity to live in space. The idea of a colony on the moon or Mars might be made possible with new spacecraft technologies being developed today. One of the remaining barriers to affordable space travel or even placing spacecraft in orbit is still the high price of launching these spacecraft. At today's prices, it would cost $12,500 just to launch an object as light as an inflated basketball (1.25 pounds) into space. The heavier the spacecraft, the more rocket fuel is needed to get the vehicle off the ground.

NASA and other space agencies are working on constructing a new breed of inflatable spacecraft made of lightweight materials. The amazing thing about these inflatable spacecraft is that they can be squeezed into small canisters only a fraction of their full size and then inflated once they arrive in space using a sophisticated deployment system that releases an inert gas to push out the walls of the inflatable material.

Space inflatable technology has been around since the 1960s, but has played a minor role in space exploration to this point. With the ability to cut costs, space inflatables could once again be used to build 1,000-foot antennas, space habitats or solar sails, which wouldn't be practical with conventional spacecraft materials. In this edition of How Stuff Will Work, we will take a look at two kinds of space inflatables being developed and how they may pave the way for interstellar travel and Martian colonies.