Browse the article How Mirrors Work 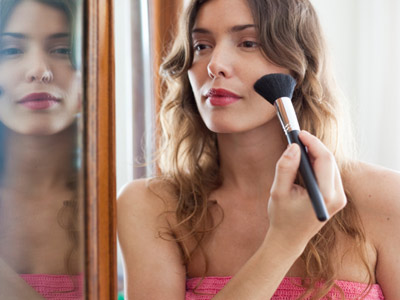 Mirrors are part of our everyday lives, but contemporary mirrors haven't been around forever.
Kathrin Ziegler/Getty Images

The conventional modern mirror is usually nothing more than a sheet of glass attached to a thin layer of metallic backing. It seems as if mirrors have been around forever in some form or another, but mirrors as we know them today haven't been around that long. As early as a thousand years ago, mirrors were still polished discs of plain metal that cost more than most people of that era could afford: A peasant who wanted to see his or her reflection had to go look in a pond like everyone else -- and had to stand in line to do it. Full-length mirrors are an even more recent invention. They're only about 400 years old.

You'd think that four centuries would give people time to adjust to looking at themselves, but you'd have another thing coming. In a 2005 study at the University of Liverpool, a group of researchers asked subjects to predict when their reflection would appear as they walked past a mirror. Their answers were embarrassingly off. The same poor results came back when people were asked to judge the size of their heads in the mirror [source: Martin].

The results of the Liverpool study suggest that humans simply aren't intuitively equipped to deal with reflections, yet mirrors resonate deeply in the human psyche. They represent truth and illusion at the same time. They show us ourselves as we are -- yet not quite -- and we see a new world to explore behind the mirror that we can't access. Perhaps these disorienting paradoxes are what make mirrors so central to both magic and science.

In this article we'll explore the history, physics and superstitions behind one of humanity's more uncanny inventions.

When humans started making simple mirrors around 600 B.C., they used polished obsidian as a reflective surface. Eventually, they started to produce more sophisticated mirrors made of copper, bronze, silver, gold and even lead. However, because of the weight of the material, these mirrors were tiny by our standards: They rarely measured more than 8 inches (20 centimeters) in diameter and were used mostly for decoration. One exception was the Pharos, the lighthouse of Alexandria, whose large metal mirror reflected sunlight during the day and the fire used to mark the lighthouse at night.

Contemporary mirrors did not come into being until the late Middle Ages, and even then their manufacture was difficult and expensive. One of the problems involved was the fact that the sand used for glassmaking contained too many impurities to produce real clarity. In addition, the shock caused by the heat of adding molten metal for backing almost always broke the glass.

It wasn't until the Renaissance, when the Florentines invented a process for making low-temperature lead backing, that modern mirrors made their debut. These mirrors were finally clear enough for artists to use. For example, architect Filippo Brunelleschi created linear perspective with a mirror to give the illusion of depth of field. In addition, mirrors helped jump-start a new form of art: the self-portrait. Later, the Venetians would conquer the mirror-making trade with their glass-making techniques. Their secrets were so precious and the trade so lucrative that renegade craftsmen who tried to sell their knowledge to foreign workshops were often assassinated.

At this point, mirrors were still only affordable for the rich, but scientists had noticed some alternative uses for them in the meantime. As early as the 1660s, mathematicians noted that mirrors could potentially be used in telescopes instead of lenses; James Bradley used this knowledge to build the first reflecting telescope in 1721 [source: Panek]. Despite the importance of this discovery, the fact remained that both were cost-prohibitive.

The modern mirror is made by silvering, or spraying a thin layer of silver or aluminum onto the back of a sheet of glass. Justus Von Leibig invented the process in 1835, but most mirrors are made today by heating aluminum in a vacuum, which then bonds to the cooler glass [source: Britannica]. Mirrors are now used for all kinds of purposes, from LCD projection to lasers and car headlights. But how do mirrors actually work? Find out on the next page.

According to legend, the ancient Greek mathematician and inventor Archimedes used an array of mirrors to defend his hometown of Syracuse against the Roman navy. By using the mirrors to focus the sun's rays on a single point, Archimedes' heat beam supposedly harnessed enough solar power to set the invading ships on fire and sink them. Debate continues over whether or not this was actually possible at the time, but Archimedes gets some points for style nonetheless. 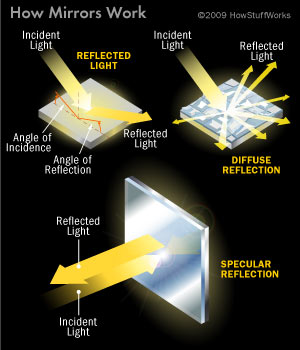 In order to understand mirrors, we first must understand light. The law of reflection says that when a ray of light hits a surface, it bounces in a certain way, like a tennis ball thrown against a wall. The incoming angle, called the angle of incidence, is always equal to the angle leaving the surface, or the angle of reflection. When light hits a surface at a low angle -- like on a lake at sunset -- it bounces off at the same low angle and hits your eyes full blast, rather than obliquely as when the sun sits overhead. This is why the sun's glare during the evening and morning is so much more intense than during the rest of the day.

Light itself is invisible until it bounces off something and hits our eyes. For instance, a beam of light traveling through space can't be seen from the side until it runs into something that scatters it, like a cloud of hydrogen or a satellite. This scattering is known as diffuse reflection and this is how our eyes interpret what happens when light hits an uneven surface. The law of reflection still applies, but instead of hitting one smooth surface, light is hitting many microscopic surfaces. It's more like throwing a handful of marbles against a statue and then guessing the statue's shape based on how the marbles bounce.

Mirrors, however, don't scatter light in this way. With a smooth surface, light reflects without disturbing the incoming image. This is called specular reflection. That concept raises an interesting question: If mirrors preserve the images that hit them, why do they turn left into right and vice versa? Why not up and down? The truth is that a mirror doesn't really reverse left and right. What mirrors switch is front and back, like a printing press or a rubber stamp. Imagine writing something on a sheet of paper in dark pen and then holding it up to a mirror. It looks backward, but it also looks the same as if you held it up to a lamp and looked at it from behind. Your mirror image is a light-print of you, not a reflection of you from the mirror's perspective.

Mirrors can be more than just flat surfaces. Next up, we'll look at some imaginative ways to use mirrors.

The type of image produced by a flat mirror is called a virtual image. Even though light is bouncing off the mirror, our eyes are fooled into thinking it's coming out of the mirror in a straight line. The virtual image can't be focused, but some mirrors, like concave mirrors, can produce a real image, which can be projected onto a surface.

One quick way to change the way a mirror works is to curve it. Curved mirrors come in two basic flavors: convex and concave. A convex mirror, which bulges outward, reflects at a wider angle near its edges than at its center, creating a slightly distorted image that's smaller than actual size. Convex mirrors have many uses. The smaller size of the images means that you can see more with these surfaces, hence their use in safety mirrors. (This is why your passenger side mirror says that objects are closer than they appear.) Some department stores have reportedly placed convex mirrors in their dressing rooms. Why? Slight bends at the top and bottom make you look taller and thinner.

Concave or converging mirrors curve inward like a spoon (the side that holds soup). This gives these mirrors the ability to create an image when their curvature bounces light to a specific area in front of them. This area is called the focal point. From far away, objects will seem upside down, but as you get closer and pass the focal point, the image flips and magnifies. Concave mirrors are used in everything from shaving mirrors to lighting the Olympic torch.

Now that you know the basic mirror types, let's learn about other, more unusual types of mirrors. Here's a short list:

Mirrors clearly play a role in our everyday lives, but what roles have they played in literature and folklore over the years? Find out on the next page.

Mirrors in Literature and Superstition 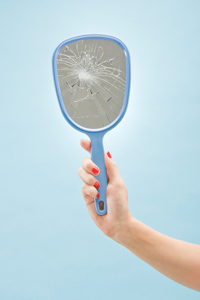 According to superstition, a broken mirror like this one can lead to seven years of bad luck.
Tooga/Digital Vision/Getty Images

Science aside, mirrors have always possessed a certain spooky otherworldliness. Magic mirrors in literature abound, from the ancient story of Narcissus, who fell in love with and pined for his own reflection in a pool of water, to present-day urban legends about summoning Bloody Mary by saying her name three times into a mirror. Snow White's queen had a magic mirror and Alice traveled through the looking glass to the other side. In ancient Chinese mythology, there's the story of the Mirror Kingdom, where creatures are bound by magic to sleep but will one day rise again to do battle with our world. Strange movements we see in mirrors out of the corners of our eyes are supposedly the first stirrings of this world as it wakes up.

Mirrors also have a strong connection to the concept of the soul, which results in a wealth of superstition. For instance, one of the reasons that breaking a mirror causes seven years of bad luck (on top of having to pay for the mirror) is that the soul, thought to regenerate every seven years, shatters with the broken mirror. Vampires, who have no souls, are thus invisible to mirrors. It's also dangerous for babies, whose souls are undeveloped, to look into mirrors before their first birthday or they will become stutterers.

Spirits are often associated with mirrors. Mirrors are covered out of respect for the dead during the Jewish mourning ritual of sitting shiva, but in many people in the U.S. also cover their mirrors when someone dies. According to superstition, a mirror can trap a dying soul. A woman who gives birth and looks in a mirror too soon afterward will also see ghostly faces peek out from behind her reflection. What's more, rumor has it that if you go to a mirror on New Year's Eve with a candle in your hand and call out the name of a dead person in a loud voice, the power of the mirror will show you that person's face.

Spooked yet? For more information on mirrors and superstitions, visit some of the links on the next page.