History of the Newton's Cradle 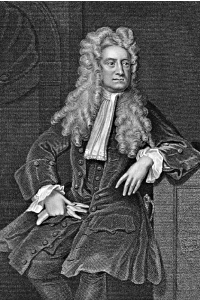 Given that Isaac Newton was one of the early founders of modern physics and mechanics, it makes perfect sense that he would invent something like the cradle, which so simply and elegantly demonstrates some of the basic laws of motion he helped describe.

Despite its name, the Newton's cradle isn't an invention of Isaac Newton, and in fact the science behind the device predated Newton's career in physics. John Wallis, Christopher Wren and Christiaan Huygens all presented papers to the Royal Society in 1662, describing the theoretical principles that are at work in the Newton's cradle. It was Huygens in particular who noted the conservation of momentum and of kinetic energy [source: Hutzler, etal]. Huygens did not use the term "kinetic energy," however, as the phrase wouldn't be coined for nearly another century; he instead referred to "a quantity proportional to mass and velocity squared' [source: Hutzler, et al.].

Conservation of momentum had first been suggested by French philosopher Rene Descartes (1596 - 1650), but he wasn't able to solve the problem completely -- his formulation was momentum equals mass times speed (p=mv). While this worked in some situations, it didn't work in the case of collisions between objects [source: Fowler].

It was Huygens who suggested changing "speed" to "velocity" in the formula, which solved the problem. Unlike speed, velocity implies a direction of motion, so the momentum of two objects of the same size traveling the same velocity in opposite directions would be equal to zero.

Even though he didn't develop the science behind the cradle, Newton gets name credit for two main reasons. First, the law of conservation of momentum can be derived from his second law of motion (force equals mass times acceleration, or F=ma). Ironically, Newton's laws of motion were published in 1687, 25 years after Huygens provided the law of conservation of momentum. Second, Newton had a greater overall impact on the world of physics and therefore more fame than did Huygens.