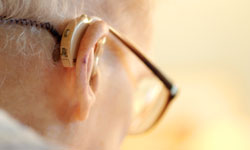 Hearing aids amplify sound, but they don't clarify it.
Comstock/Thinkstock

In the late 1970s, Adam Kissiah Jr., a hearing-impaired engineer working on the space shuttle program at NASA's Kennedy Space Center, knew all too well the shortcomings of conventional analog hearing aids. They simply amplified sound entering the ear without clarifying it. In an effort to solve the problem, he put to use his knowledge of NASA's advances in electronic sensing systems, telemetry, and sound and vibration sensors. He came up with the concept for a new type of hearing aid -- an implant that would produce digital pulses to stimulate the auditory nerve endings, which then would transmit the signals to the brain.

Kissiah went on to work with BioStim, a private company, to develop the new device. Kissiah's patented concepts were built upon by other manufacturers [source: Space Foundation]. Since then, according to the U.S. Food and Drug Administration, 219,000 patients have received cochlear implants [source: NIDCD]. The devices enable people who've been deaf since birth to hear for the first time. They've also restored hearing for those who still have a responsive auditory nerve but who've lost hearing due to trauma or disease [source: Space Foundation].

This application of space technology has made an enormous difference in the lives of people like Mike Scheerer, a Peoria, Ill., man in his late 50s, who received a cochlear implant in 2009 and heard songbirds singing in the trees in his neighborhood. "I would say that's the most beautiful thing I ever heard," he told the Peoria Star newspaper. "I had never heard birds before, that I can remember" [source: Davis].

NASA's role in revolutionizing our senses doesn't stop with hearing. Find out how the organization protects people's vision next.